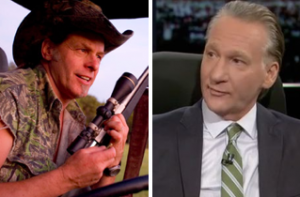 Rocker and avid gun rights enthusiast Ted Nugent has revealed an unusual hobby. And it’s all for the benefit of “Bill Maher and all those other animal rights freaks out there.”

“I took my machine gun in the helicopter — in the Texas hill country – me and my buddy ‘Pigman’ … his name is ‘Pigman’ – I’m the swine czar. I killed 455 hogs with my machine gun. I did it for Bill Maher and all those other animal rights freaks out there.”

A look back at Nugent’s Twitter account shows that this wasn’t the first time he had partaken in this pastime. He posted this provocative message back in January:

During the radio interview, Nugent went on to explain that his actions were meant to help “save the environment from the destruction of these out-of-control pigs and I’m not talking about Washington D.C. or San Francisco … I’m actually talking about actual pigs.”

And he didn’t just let the 455 hogs go to waste. “We distributed tons of the most delicious pork to the soup kitchens and homeless shelters of this state,” Nugent said “Everything we did was perfect – win win win.”

If the first “win” was saving the environment and the second “win” was feeding the homeless, we can only assume that the third “win” was the pure enjoyment Nugent got from shooting his machine gun. If you throw in pissing off Bill Maher, you might as well throw in one more “win,” making Nugent’s actions “win win win win.”

Maher has yet to respond to Nugent’s boasts, via Twitter or any other means of communication. But no one should be surprised if this story ends up as one of his “New Rules” on Friday.