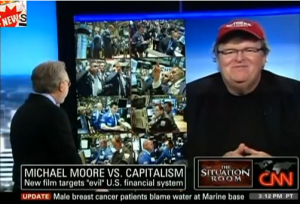 When Wolf Blitzer recently interviewed Michael Moore about his latest documentary, Capitalism: A Love Story, the interview got uncomfortable, and fast. Moore’s last big appearance on The Situation Room was a tense one, to say the least — Moore accused Dr. Sanjay Gupta of “lying” about his 2007 documentary, Sicko, and there was further bad blood after Gupta and Larry King tag teamed him on Larry King Live, refusing to let him get a word in edgewise.

This isn’t quite as contentious, but involves stiff interruptions, nervous laughs, questions based on “charge[s] that will be made” by people in the future, maybe, and even a tense debate about the merits of ATMs. The highlights:

0:17: Just seventeen seconds in, Moore alludes to “the big YouTube moment that we had with each other,” i.e. the heated ’07 interview. Blitzer chuckles nervously.

1:45-2:00: Spurred by a question of Blitzer’s about the response of people who “don’t like” Moore, the two talk over one another about whether there are, in fact, any people who don’t like Moore. Moore says he will cook them dinner.

2:40: Michael Moore compares himself to the Founding Fathers. “I wonder if there was a Wolf Blitzer 200 years ago who asked Thomas Jefferson or John Adams or George Washington, ‘hey, you know, you guys are wealthy land owners, you’ve benefitted from the king’s system, what are you complaining about?'”

6:00: Blitzer trips Moore up a little: “which country has an economic system that you like?” Moore (stumblingly): “I don’t think that exists yet.”

10:30: More awkward stumbling about the question of whether it was Bush or Obama who authorized the bank bailouts.

Part two, 0:02: The “‘Largest ever’ Anglo-Saxon gold hoard found” chyron is just too much.

0:30: Blitzer: Obama, Bush, and Clinton all pretty much the same on their attitudes towards the banking industry. Moore: “You are wrong.”

After that, things largely cool down, although Moore laughs a little hostilely at Blitzer’s choice of the word “disappointed” to describe his attitude towards Obama’s economic team.

Though it’s weird that an interview turned out to be as much like a debate as this one did, the clear ‘advantage’ is Moore’s. The political tides seem to have turned on him since Bush left office and he can no longer serve as the voice of the resistance, but even though his views are often extreme and impractical, he’s smart, articulate, and still a helluva debater. Blitzer, by contrast, came across as stiff, and ducked behind canards like “some people might think” and a film review by Manohla Dargis rather than forthrightly asking the questions.

If Blitzer didn’t have anxieties about rotund, wisecracking fellas from Michigan before, he surely does now…

Here’s part one of the interview: