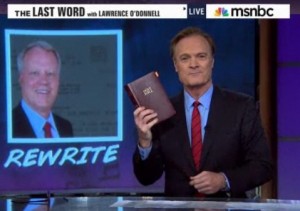 On Monday night’s The Last Word, host Lawrence O’Donnell devoted his patented Re-write segment to the favored liberal pastime of making Bible literalists look (more) foolish by reading The Bible to them. In this case, the target was Rep. Paul Broun (R-MO), who recently made remarks (apparently from inside a deer-themed kaleidoscope) indicating his belief that evolution, embryology, and The Big Bang are “lies, straight from the pit of Hell.”

O’Donnell connected Broun to fellow Missourian Todd Akin by dint of Broun’s literal interpretation of the Good Book, reading a passage that, like Akin and VP hopeful Paul Ryan, draws some funny (not “ha ha” funny) distinctions about rape:

The Bible passage that O’Donnell quotes is real (although he’s using a version of the Bible that’s not a King James, which, in my church, is tantamount to quoting a Playboy magazine), and it actually gets worse as you read on. Here’s the full passage, from the King James Bible:

22 If a man be found lying with a woman married to an husband, then they shall both of them die, both the man that lay with the woman, and the woman: so shalt thou put away evil from Israel.

23 If a damsel that is a virgin be betrothed unto an husband, and a man find her in the city, and lie with her;

24 Then ye shall bring them both out unto the gate of that city, and ye shall stone them with stones that they die; the damsel, because she cried not, being in the city; and the man, because he hath humbled his neighbour’s wife: so thou shalt put away evil from among you.

25 But if a man find a betrothed damsel in the field, and the man force her, and lie with her: then the man only that lay with her shall die.

26 But unto the damsel thou shalt do nothing; there is in the damsel no sin worthy of death: for as when a man riseth against his neighbour, and slayeth him, even so is this matter:

27 For he found her in the field, and the betrothed damsel cried, and there was none to save her.

28 If a man find a damsel that is a virgin, which is not betrothed, and lay hold on her, and lie with her, and they be found;

29 Then the man that lay with her shall give unto the damsel’s father fifty shekels of silver, and she shall be his wife; because he hath humbled her, he may not put her away all his days.

Don’t even ask me what that last verse means. I guess you’re supposed to keep your dad’s cross-dressing on the down-low?

Here’s the first takeaway: according to the Bible, it seems, you’re totally allowed to rape any woman who’s not a virgin. Maybe they passed an amendment later on, who knows. It also seems like they’re saying that as long as the woman, virgin or not, is “available,” then rape (“Lay hold on her” doesn’t sound like consent to me) goes from being a capital crime to a civil matter, punishable with a fine, payable in silver to the damsel’s dad, and a quickie rapist-damsel wedding.

But O’Donnell’s interpretation is essentially correct, Deuteronomy is drawing a distinction between different types of rape that is almost exactly the same as the one Todd Akin drew (between “legitimate” or “field” rape, and rapes that never happened, or “city rape”), and very similar to the one Paul Ryan made in several bills that he co-sponsored. At best, Ryan was distinguishing between “forcible rape” and the “consensual” rape of a child, and at worst, both statutory and hoax-y rapes that don’t produce injuries.

The reading of these passages shouldn’t be taken as an attack on Christianity. Lots of Christians know that the Bible shouldn’t be taken literally (and the rest only do so when it suits their needs), and understand that it was written, inspired or not, by rather primitive men. No, this passage says a lot more about the Akins and the Pauls Broun and Ryan of the world, who haven’t evolved past those primitive views in the intervening thousands of years.

In fact, if you read this passage carefully, it appears that the God of the Old Testament was actually more progressive than Paul Ryan and Mitt Romney, who both believe that life begins at conception, that a fertilized egg is a person. In verses 22 and 24, God says it’s perfectly fine to kill that unborn person/fertilized egg, and even commands it.