The Five Rails Against Obama’s ‘Divisive’ Speech: Won’t Stop Until He ‘Gets George Zimmerman’s Blood’
VIDEO

The Five Rails Against Obama’s ‘Divisive’ Speech: Won’t Stop Until He ‘Gets George Zimmerman’s Blood’ 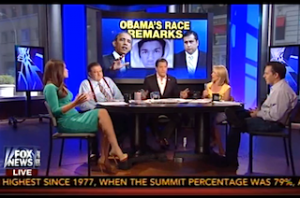 The Five kicked off their Friday afternoon show on Fox by tearing apart President Obama‘s remarks about race and the George Zimmerman verdict, calling the president “irresponsible,” “divisive” and claiming he and the Justice Department won’t stop until they “get the blood of George Zimmerman.”

Kimberly Guilfoyle began by saying Obama never should have weighed in on the case in the first place and now he’s “repeating talking points from a lot of activists in the community that are displeased with the outcome and are really looking for essentially a public crucifixion of George Zimmerman to make their point. That is not the way to move forward in this country or improve race relations.”

Leading the charge for the other side of the debate was Bob Beckel, who said he thought Obama “made exactly the right points” in his speech and commended the president for clearly explaining to the American people why the African-American community is reacting the way they are to the verdict.

Moving on to the issue of “Stand Your Ground” laws, which Obama acknowledged was not specifically used in Zimmerman’s defense while also holding it up as an example of potential injustice, Guilfoyle accused the president of “confusing the public” with “more irresponsible behavior.” Along with Attorney General Eric Holder‘s civil rights investigation, she said, “nothing’s going to be enough until they get the blood of George Zimmerman.”

Eric Bolling agreed, saying Obama only brought up “Stand Your Ground” because he’s the most “divisive president in history.” That comment drew a loud, “Give me a break!” from Beckel.

Finally, Greg Gutfeld, who earlier in the segment said he was suffering from “opinion depletion,” offered some surprising support for Obama. “He did mention something that is strikingly different from the Sharptons of the world,” Gutfeld said. “He says it’s getting better, which flies in the face of race baiting. And that is a positive thing.”

When Gutfeld got push back from some of his more conservative co-hosts, he said “I’m stressing one positive element of his speech, give him something for god’s sake!”