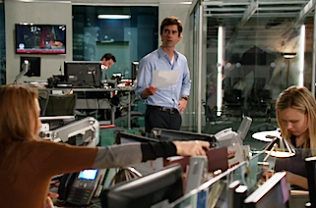 The Newsroom‘s third episode of the second season opened with the voices of 2012 GOP presidential contenders Michele Bachmann, Herman Cain, Mitt Romney, Rick Santorum one-upping each other on just how much they love the troops. It was all part of Will McAvoy’s Keith Olbermann-style Special Comment (or is it, more appropriately to Aaron Sorkin’s mission, a Lawrence O’Donnell-style Rewrite?) on Stephen Hill, the gay solider who was booed by the audience at the September 22nd, 2011 Fox News-sponsored GOP debate. It was the first major moment of righteous history rewriting in last night’s episode, with Will saying of the Orlando audience members, “Soon, they’ll surely be in hell, though not soon enough.”

The other big moment of signature Newsroom indignation came on the Romney bus in New Hampshire, where Jim is quickly tiring of the campaign’s talking points. He has a new punching bag in Constance Zimmer‘s Romney press spokesperson Taylor, who he berates for specifics on the governor’s entitlement reform plan. And, of course, it’s only Jim who is asking questions about why Romney doesn’t want to talk about Romneycare, lest it be confused with this Obamacare thing everyone’s so excited about.

But the big showdown comes later when Jim finally goads his campaign-crush Hallie into pressing the abortion issue with Taylor on the bus. When she predictably gets no answer, Jim gets a chance to make his Jerry Maguire-inspired “Who’s with me?” speech to get everyone off the bus and covering campaign for real, the way campaigns are meant to be covered. Only Hallie and the weird “Tequila” guy join him, standing on the side of the road in the middle of the night. But at least some political journalism might actually happen… at some point!

Back to Will, he has a renewed problem in the form of Hope Davis‘ gossip columnist Nina Howard, who’s back in the picture and sniffing around leaks about why Will didn’t anchor 9/11 anniversary special. Unsurprisingly, the rest of the world somehow believed he had the flu and not something more insidious. Because, really, do that many people really give a shit why Will McAvoy wasn’t sitting in the anchor chair on 9/11 2011? We at Mediaite probably would have taken notice, but anyone else?

Will tries to sweet talk Nina into dropping her story by closing down the corporate dining room for the romantic mimosa session, but he doesn’t even have to get through his “9/11 is a sacred day” spiel before Nina says she won’t run her scoop. Why? Because she likes that Will was “honest” with her that it was Charlie who took him off the special. Later, we find out that Will’s seduction techniques some to have actually worked.

Meanwhile, back at the office, Jerry is chasing Operation Genoa hard. He and Mac meet with their source Eric Sweeney to get the first-hand account of how the Marines used white phosphorus “for cover” but then also sarin gas during the secret mission in Pakistan. When they bring the update to Charlie, the news president is increasingly skeptical of Sweeney’s story, not so eager to land the exclusive, war crime story of the century.

But how can they verify whether this thing actually happened? When Jerry’s plan of calling any military officer who may have been involved hits a brick wall, the plan gets a boost from Maggie of all people. She’s taking pre-Uganda crazy pills, so her demeanor is even more confused, agitated and paranoid than usual, but that doesn’t stop her from suggesting they should use something called Twitter(?) to search for info about Operation Genoa from the Pakistani civilians who were its target. No one can quite believe that random Pakistani people would have Twitter, but Neal helpfully points out that yes, they do.

As for Neal, he still hasn’t convinced Mac to stop making fun of Occupy Wall Street and it’s over-zealous pepper-spraying cops. Could it be, as he suggests, that cable news executive producers, with their fancy shoes, were just too dependent on Wall Street to highlight the movement that opposed it? Either way, Neal shames Mac into giving five minutes of coverage to the movement after he shows he that even Fox News’ Megyn Kelly, making the rare Newsroom cameo by an actual news personality, has been covering the story. When Mac points out that Kelly calling pepper spray “a food product, essentially,” wasn’t exactly quality news programming, Neal responds, “It was better than our nothing.”

Towards the end of the episode, we’re reminded that there are these characters called Don and Sloane who are pretty into each other. Sloane is still thinking a lot about drones, as we find out when she says she’s trashing drone missile stocks on the air against the wishes of her superiors. And Don is still trying to start his live over after Maggie, which we know because he’s seen putting “new tires” on his desk chair. This leads to one of the best gender juxtapositions in the show’s history, with Sloane hammering her EP for daring to censor he on-air opinions while Don literally falls out of his chair–twice.

The episode’s climactic ending comes with the slow translation of tweets coming through on something that looks like a fax machine. Jerry finally has what he needs to make Operation Genoa stick. “Willie Pete everywhere. Burning,” one tweet reads. Thanks to Charlie, who was in Vietnam, we know “Willie Pete” is another name for white phosphorus.

Overwrought quotes of the week: