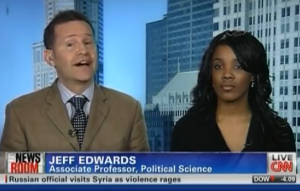 With nationwide Occupy camps being shut down and cleared out of parks across the country, those halcyon days of Fall 2011 — protesters wiping their butts on police cars, job fair organizers being heckled, Miley Cyrus music videos, hipster cops, and awesome bicycle technology — are but distant memories. But they aren’t forgotten. One institution of higher learning, Chicago’s Roosevelt University, is offering a course on the five-month old movement, as Occupy Chicago played out across the street from its campus.

“All analysts agree that this has really changed the discourse of American politics already,” Edwards explained. “And it seems to me it’s a movement that’s going to have staying power, that’s going to be around for a long time and have some impact.”

Cross, a graduate student, said that she was attracted to the course because it helped her understand the movement in the context of past history, as well as allowing for her to compare it to similar protests in the Middle East. She also added that the class benefited from, “having students actually in the class who are active Occupy protesters.”

Professor Edwards, who told host Kyra Phillips that he had no resistance to his idea for the course from anyone in the school’s administration, said that he felt the course would still be available in five years, because the movements take time to play out. “If it’s going to be effective,” he reasoned, “it will have to play out over… an extended period of time, because this movement is tackling huge issues in our society.”