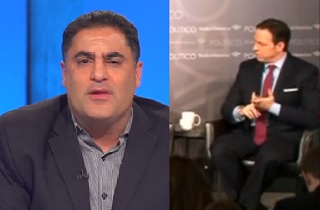 During a Politico panel last week, CNN anchor and Mediaite Awards nominee Jake Tapper joined other mainstream journalists in copping to a “liberal bias” in the mainstream media, a move which Tapper predicted would delight conservative activists like Brent Bozell. It also didn’t sit well with progressives like The Young Turks‘ Cenk Uygur, who took to his pioneering online show to blast Tapper for perpetuating the “myth” of a liberal media bias, and to demand, of Tapper, “Do your job!”

During the full segment, Cenk explained that the real bias in media is a pro-establishment one, but took particular aim at the influential Jake Tapper, who explained his views on bias to Politico’s Mike Allen. “A certain Type of person becomes a reporter,” Tapper said, adding that “generally speaking, the kind of person who becomes a reporter in Washington, DC or New York City has never worked a minimum wage job,” and “has never experienced poverty, is not an Evangelical Christian, like much of the country is.”

“There are a lot of experiences that the kids of people who are reporters, editors, producers, et cetera, in Washington and New York, have never had,” he continued, but noted that “there is an awareness of that, and when there is an awareness is when the best journalism can happen.”

Cenk led off his criticism delicately: “It’s hard for a human being to be more wrong than Jake Tapper was there,” he said, and with a brief Thurston Howell-style mockery, added that “I know you’ve been high-fallutin’ for a long time, but if you work in local news, you’re lucky if you make $24,000 a year.”

Uygur accused Tapper of being “in a different circle, where the establishment and the government is always right, and would you look at that? You got all those promotions, Jake!”

“Liberals are not the real country,” Cenk continued, “that’s the second point that drives me crazy.”

He noted that only about 25% of the country are evangelicals, and cited polling data that consistently indicates Americans are overwhelmingly to the left on issues like protecting social security, Medicare, Medicaid, war in Syria, and raising the minimum wage. Although he didn’t note this, after months of relentlessly negative, misleading, and just plain false reporting on Obamacare, a majority of Americans still support the law, or want it to be more liberal.

“You name an issue, and the country that you’re reporting on is actually liberal, but you don’t know that, because you internalize what the conservatives said,” Uygur continued.

“Oh, it’s a horse race, it’s fantastic,” Uygur said, “the entire country’s conservative. No it’s not! Do your job!”