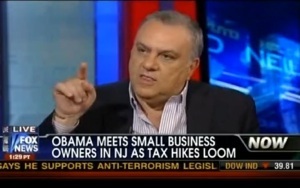 Okay, it wasn’t the Soprano‘s character, but it was the actor who portrayed him Vincent Curatola who showed up on Your World with Neil Cavuto. As one can see in the following clip, the actor and character seem to have a lot of the same mannerisms. Rarely does one see a public personality or actor speak with so much bile about an elected official (particularly the President of the United States) but one gathers that is the exact reason he was booked on Your World.

One can only wonder the booking process that preceded this booking: Producer A: “Hey look at this clip: Governor Christie is pals with the guy who played Johnny Sack on the Sopranos.” Producer B: “Call him up and see if he’s willing to trash Obama on TV.” Producer A: “Great idea!”

Need an example of his anti-Obama screed? Check out a partial transcript below:

If he had respect for the country he would throw his hands up in the air and say “I’m done.” “I have no idea what to do with any of these situations.”

I’ll tell you one thing. One-time president. I believe that and I’m not a psychic. The damage between now and the next 2 1/2 years with this guy, especially to the small businessman absolutely outrageous.

I would love to know if people can come back from the dead from world war II and saw in — saw this today, my God, they would move to a communist country. It didn’t work in the soviet union, not working in Cuba. We don’t need the government, get out of the way. Tell the banks that you bailed out, lend money out to credit-worthy people and let business take ca of business because it always does.

Cavuto defended the booking by ending the segment by claiming “for those of you who criticize my choice of Vince as a guest, because Vince has a better track record.”