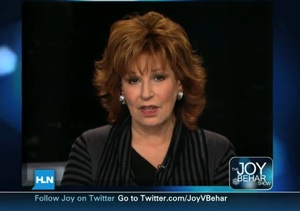 Late Wednesday night, Deadline broke news that Joy Behar would be leaving her show on HLN at the end of the year. And boy, did it do wonders for her ratings. Behar attracted 198,000 viewers in the 25-54 year-old demo. The show still finished fourth, but it was a marked jump from her previous numbers — Behar had averaged 97,000 demo viewers over her previous 10 shows. The jump may have just been from curiosity-seekers, but it was a jump, nonetheless, and Behar’s show was the highest-rated on the HLN slate Thursday night.