Tiger Woods Gets a Privacy ‘Pardon’ From Mike Huckabee
video

Tiger Woods Gets a Privacy ‘Pardon’ From Mike Huckabee 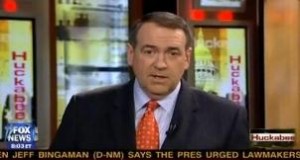 We’ve heard a lot from and about Mike Huckabee regarding the commuted sentence of Maurice Clemmons, but the Fox News host also weighed in on the major media story of last week, Tiger Woods.

On his weekend show, Huckabee urged people to “get a life” – and essentially leave Tiger alone.

“I know my view is probably not that of most people, but I’m not sure that Tiger Woods’ personal issues with his wife behind the doors of their home is any of my business,” said Huckabee in a monologue segment at the beginning of his show. “I’m just not sure that just because he’s a celebrity sports figure that somehow we have a right to demand that he tell us everything he does in private.”

Huckabee ended with this line: “Focus on what’s going on behind the doors of your house.”

When I tweeted about this Saturday night, one response focused on Huckabee’s ‘live and let live’ attitude when it comes to Woods. @NewsJunkie365 wrote, “Too bad he doesn’t extend that feeling to gay couples.”

It does seem that Huckabee is strongly coming down on the libertarian side of the issue in this particular case, but clearly, when it comes to other, more politically-tinged issues, does not extend the same beliefs. As more women come out and claim affairs with the billionaire golfer (the current count is at seven), we’ll see if Huckabee and others who share his opinion change their tune. As CBS’ Bob Schieffer said on Sunday, in a marked difference from Huckabee, “If you wanted to be normal, you should’ve taken Arnie’s advice: just play golf with your friends on Saturdays, like the rest of us.”