Obama: The Media Is Keeping America From Economic Recovery

Obama: The Media Is Keeping America From Economic Recovery 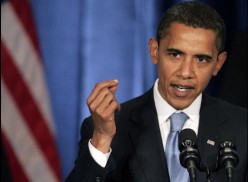 You don’t need us to tell you that the recession is not over. Despite the Obama administration’s various bailout plans people are still struggling, and there is the strong sense things may remain this way for longer than predicted. So who’s fault is this? Depending on what news source you follow and/or how well-versed you happen to be in the economic history of this country the answers range from Wall St, to Main St., to Reaganomics. President Obama, however, apparently has pinpointed his own culprit: the media.

Michael Scherer at Swampland picked up this fairly aggressive response to a Q&A at last Thursday’s job summit (between Afghanistan, the Kennedy Awards, and his visit to the Hill yesterday the President has had a busy week!). After agreeing with a audience member that the recession does offer America a chance to reinvent “If we can recapture that sense that we’re in this thing together and that we are willing to work hard” Obama took aim at the press as the purveyor of the sort of divisiveness that is keeping the country from being successful at doing just that.

But it’s not going to come easily and it is going to require a level of cooperation and a willingness to work strategically together that we have not seen over the last several years. And frankly, this town and the way the political dialogue is structured right now is not conducive to what we need to do to be globally competitive. And all of you are leaders in your communities — in the business sector and the labor sector, in academia, we even have a few pundits here — it is important to understand what’s at stake and that we can’t keep on playing games.

I mentioned that I was in Asia on this trip thinking about the economy, when I sat down for a round of interviews. Not one of them asked me about Asia. Not one of them asked me about the economy. I was asked several times about had I read Sarah Palin’s book. (Laughter.) True. But it’s an indication of how our political debate doesn’t match up with what we need to do and where we need to go.

Scherer points out that Obama’s characterization of his interview questions is not quite accurate — he was asked about the jobs bill and the South Korean trade agreement. Still, does the President have a point? It doesn’t take a genius to note that in the last six months the coverage of the President not only has become a national pastime of sorts but also increasingly polarized. And polarizing sells. So does the sort of stunt-like news stories that have been derailing the President’s various agendas at every turn: Town Halls, Kanye West, Joe Wilson, Sarah Palin, The Salahis. Of course in a world where every type of media is scrambling to keep its head above water, let alone make a profit, it’s hard not to chase the ambulance. Perhaps Obama needs to quit complaining and try and figure out how to beat the press at its own game.