Todd Akin Leaves Open Possibility Of Stepping Down: ‘I Don’t Know The Future’ 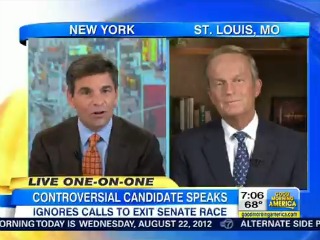 Missouri Senatorial candidate Todd Akin appeared on ABC’s Good Morning America Wednesday, where he discussed his recent comments about rape. Host George Stephanopoulos began by asking him about his use of the term “legitimate rape” and his insistence on remaining in the race despite repeated calls to drop out.

Host George Stephanopoulos started by asking Akin about a Tweet he’d sent saying that “the liberal media” is trying to get him out of the race, pointing out that this demand is also coming from Mitt Romney, Republican senators, Fox News’ Sean Hannity, and radio host Rush Limbaugh. As he said, that’s not the liberal media.

“You’re right on that,” said Akin, later adding that “I don’t think it’s right for party bosses to override those voters. So, I think it’s — I think really, we should allow things to stand, and let the election process unfold.”

Stephanopoulos asked if this meant he would not be dropping out, prompting Akin to respond that he is “never going to say everything that can possibly happen. I don’t know the future,” and, again, ” it makes me uncomfortable to think that the party bosses are going to dictate who runs as opposed to the election process. I believe in that principle.”

RELATED: Sarah Palin Urges Rep. Akin To Step Aside: ‘Take One For The Team’

When the host asked about his previous apology, wherein he’d noted that “I misspoke one word, in one sentence,” Akin addressed his use of the term “legitimate rape” while maintaining his stance as a pro-life candidate:

First of all, let me say, that legitimate, the word legitimate, doesn’t ever have a good reason standing next to rape. There’s no rape that is legitimate. And I understand that rape is a terrible and a tragic and a violent crime. And that’s why I have apologized for using that word legitimate because it doesn’t belong there. And I also know that I hurt people. And the first thing that I felt was right to do was to apologize. But I’m not apologizing for the fact that I’m pro-life and that I also believe it’s important to defend the unborn.

He later said that his statement had been “medically” wrong, and that he is aware that pregnancies can indeed result from rape. Again, he reiterated that he will not apologize for being “consistently pro-life.”

When Stephanopoulos pointed out that some women are afraid to come forward about their rapes due to shame or other factors, Akin said that he’s aware that rape does indeed leave lasting scars but, again, is not apologizing for being pro-life.

Akin then said that he is not stepping down, despite calls to do so from prominent members of his party, and that he is focused on drawing a contrast between himself and his Democratic opponent.