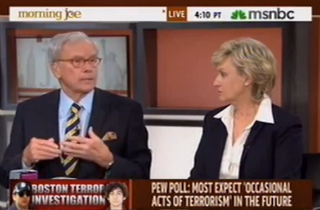 Appearing on MSNBC’s Morning Joe this morning, veteran NBC News anchor Tom Brokaw cautioned the media against “going to the extreme” in its reaction to tragic events like last week’s Boston Marathon bombings, before lamenting that part of the problem is a lack of understanding and the “enormous gap between the Western values and understanding the Islamic faith.”

Lehigh University Professor James Peterson asserted that the media should not talk about “radicalization” of the bombing suspects in a way that broadly “demonizes” the Muslim religion. We need to be certain we discuss the bombers’ radical beliefs “in a way that is particular to the profile of folks that are in this case — and that’s not used to sort of superimpose over an entire culture or entire religion.”

Brokaw added that in the wake of terrible events like the bombing, social media tends to go to “DEFCON 1” by going to “the extremes on both sides.”

“That is a big part of the problem,” he added before explaining:

“And we have — for ten years of this war we’ve been fighting in Afghanistan, in Pakistan, in Yemen, in the Sudan, and other parts of the world — we still have an enormous gap between the Western values and understanding the Islamic faith; and the Islamic faith having any tolerance at all for the way we live and the values that we cherish in this country. Pluralism, the rights of women, and the rights of a democratic society. So that’s been a failure in an attempt to win these wars — and to try and find how we all understand each other a lot.”