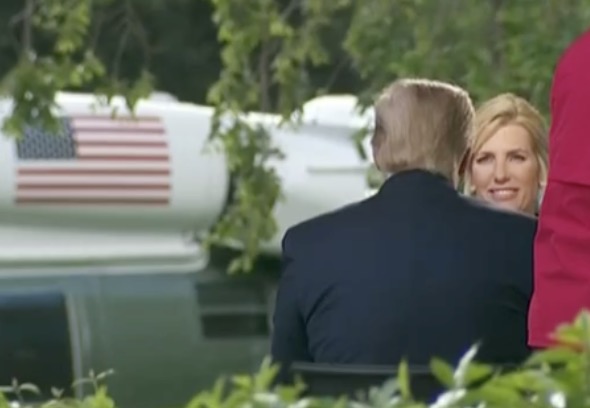 The ceremonies commemorating the 75th anniversary of D-Day Thursday morning were set to start sharply at 11:00 AM local time, but actually started 30 minutes later than planned. According to MSNBC White House reporter Hallie Jackson, President Donald Trump’s conversation with Fox News primetime host Laura Ingraham may be the reason for the delay. It was later revealed, after the initial publishing of this post, however, that French President Emanuel Macron was 30 minutes late and the primary reason the delayed start to the ceremony.

Jackson noted via Twitter that a French feed revealed that Trump was sitting with Ingraham 14 minutes after the scheduled 11:00 AM start time, before noting an announcement declaring a 15-minute delay, suggesting that the delay was due to Trump’s conversation with the Fox News host. Jackson tweeted:

French television cameras spotted President Trump sitting down with Fox’s Laura Ingraham – fourteen minutes *after* the ceremony in Normandy was set to begin. Thousands of people waited as an announcement overhead came on, declaring the program would be delayed until 11:15a.

Like many American news and opinion hosts and anchors, Ingraham joined a massive entourage of media to cover the commemoration events, hosting Wednesday night’s episode of her show with gravestones of fallen heroes as her backdrop. Ingraham scored the somewhat elusive Trump interview which reportedly was scheduled just before the Normandy ceremony was set to begin, but appeared to run long.

President Trump began his day in Normandy sitting for an interview with Laura Ingraham on Fox (pic from Host TV): pic.twitter.com/9RXZiEp57B

AP’s Jonathan Lemire appeared to confirm this report as well:

Trump did Fox News interview after he arrived, slowing him from reaching stage. But, from pool’s vantage point, he appeared to be done and ready before Macron arrived, at which point ceremony began

Bloomberg’s White House reporter pushed back a bit on this, however, noting that French President Emmanuel Macron was also late:

Trump did a Fox News interview with Laura Ingraham before the war remembrance in Normandy.

D-Day ceremony began late, but reporters at the event say Trump had finished his Fox gig before France’s Macron, who was apparently running late, had arrived. https://t.co/dqbW4qcrfe

Ask any television producer who has ever scheduled, conducted or arranged such a high-profile interview, the odds that it will run long are extremely high. As such, one can reasonably question the wisdom of scheduling such an interview just before the D-Day ceremony to start.

Update: CNN’s Jim Acosta appeared to confirm the report that Trump’s Fox News interview delayed the ceremony start, telling New Day viewers “One of the reasons why President Trump was delayed, one of the reasons he was late getting here, he was sitting down with a Fox News personality before his speech began. So it’s possible he was dishing out a lot of the red meat while he was sitting down with fox before giving the speech.”

Acosta then added praise for Trump’s speech, with “But honestly, you have to put that to the side and recognize this was just a really captivating, stirring remarkable moment for the entire world to witness. Politics was just put aside, washed aside as we remember the bravery and currently of the men today.”

UPDATE: Further reporting, including a clarification from Jackson, appears to confirm the Jennifer Jacobs account.

As @JonLemire notes: from pool’s vantage point, the president appeared to be done and ready before Macron arrived, at which point ceremony began.

Editor’s note – this post has been updated since original publishing to better reflect the variety of reports.