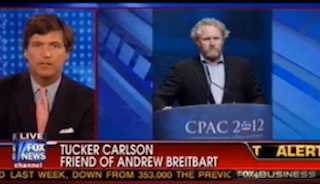 “It’s hard to believe it is actually true,” Carlson said. “I talked to him last night. Seemed totally exuberant as he always does. Funny as hell. Really, I know, there were people, many people who didn’t like Andrew and he was a pugnacious guy. Anyone who knew him in person, he was one of the more cheerful people ever. Just a riot. Just truly one of the funniest people I ever met.”

“I met him, we’re the same age, our wives have the same name and four kids and same business,” Tucker explained. “We were bound to run into each other after a while. We’re from the same place. I don’t know, I met him in the ’90s in Washington. Just kept up with him — was a really compelling person with a great capacity for friendship. I hope that doesn’t get lost in the — I’m sure — intense discussions about his politics and his political activism. He was a great guy. He really one of the great dinner partners ever. That is one of the highest compliments I could bestow on anyone with a thorough decency. Even to people, maybe especially to people he didn’t agree with. As intense as he was in his arguments, he was able to see what people were really like beyond their politics. I don’t know if that was always obvious in public but he had friends who passionately disagreed with him, including some people very close to him. So he is just a great guy.”

Watch Carlson’s tribute to Breitbart below via Fox News: