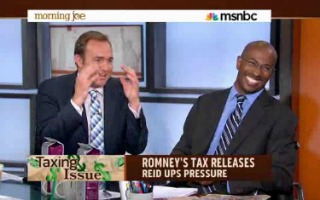 On Friday’s Morning Joe, panelist Van Jones argued that the Republican party as a whole — rather than simply the Tea Party movement — has undertaken a “bodies on the beach” strategy. Basically, he explained, “they” think that the more bodies there are lining the beach, the more likely people will be to “fire the lifeguard” — as in, the more likely Americans will be to vote Barack Obama out of office. The more Americans are in pain, he continued, the more they stand to gain.

“They want Obama fired so they don’t care how many Americans are in economic pain,” he said. “The more Americans in fact in economic pain, they see for themselves political gain. And that’s why you’ve seen not just the Tea Party but the entire Republican party refuse to step up to the plate on common sense stuff like tax cuts for small businesses, tax help for veterans. Go down the line and you’ll see that things Republicans stood for, they stand against and won’t pass in this Congress because they want to hurt the American people economically so they can gain politically. That’s not just the Tea Party.”

Sen. Chuck Schumer disagreed that the problem was an inherently Republican one, placing the crux of the blame on the Tea Party specifically, which he described as gaining a stronger foothold within the party. “But there’s a fight within the republican party,” he said. “There are some Republican senators who want to work with us. They really did.”

The trouble is, he said, “the Tea Party group is gaining ascendancy in the Republican party. Bad for them, but worse for the country.”

“One of the worse things that happened that will prevent us from reaching a resolution of the fiscal cliff in December was the loss of Dick Lugar,” said Schumer. “He was respected, liked. And the guy he lost to said — he’s a Tea Party guy — he said, ‘I believe there’s too much compromise in Washington. The only compromise I want is when Democrats surrender to Republicans.’ How — that is not how the founding fathers set up our system. Now, the good news is America corrects itself. It may correct itself in this election. One of the reasons that we’re doing much better in the Senate than anyone thought is because the hard right, the Tea Party is knocking off mainstream Republican candidates and putting up their candidates. Last time, that led to the election of Democrats in places like Colorado, Nevada, Delaware.”