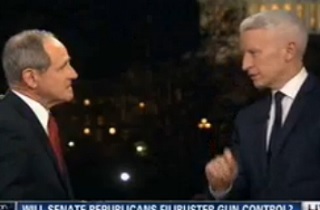 There have been several iconic moments in the post-Newtown fight over gun violence, like Wayne LaPierre‘s ill-advised press conference shortly after the shootings, Gabby Giffords‘ heroic testimony before Congress, the Sandy Hook families’ promise, and the President’s powerful “They deserve a vote” State of the Union speech, among others. CNN’s Anderson Cooper conducted an interview Tuesday night that should be included among those, as he exposed the comically nonsensical logic behind Sen. James Risch‘s (R-ID) opposition to universal background checks, using nothing but journalism.

Senator Risch is one of the 14 Republicans who have been threatening to filibuster any new gun regulations, and as Cooper noted, the only one he could get to appear on-camera with him.

That threat has dried up like a powdered raisin, as Sen. Risch conceded. “I think there’s clearly 60 votes to override filibuster,” Risch said. “There will be a debate on this this week.”

The rest of the interview was a preview of how that debate might go. While there have been fine examples of tough interviews on guns, Cooper kept Sen. Risch on-topic long enough for him to rack up contradictions like coins in a Mario Brothers game. The result is the closest thing you’ll see to an Abbott and Costello routine this week.

Risch began by explaining that we shouldn’t expand and improve the current system of background checks because “The background check system we have right now is not being enforced and it isn’t working.”

Ding! That’s like saying you shouldn’t fix the hole in your umbrella because the umbrella isn’t keeping you dry.

He then argues that “the vast majority of guns that are sold at gun shows are done so by FFL dealers. They have to do a background check.”

Cooper asks Rish “Why not control, you know, a relative selling a gun to a relative or friend to a friend? Why not have a background check?”

Risch responds that something we don’t do “doesn’t work,” and adds that “it’s placing the burden on law-abiding citizens. The person who is going to use the gun for illegal purposes is not going to go through the background check system.”

Ding! Seconds later, after Anderson reminds him of the thousands of ineligible purchases that are prevented by background checks, Risch says “Anderson, you make a really good point. In the last year the statistics are available for, 15,000 people were convicted felons, or on the run, who lied and committed a felony on the background check form.”

“Out of those 15,000, they prosecuted 44 of them. We need to enforce the laws that we have. Those 15,000 should have been prosecuted because you know they didn’t stop trying to get a gun. They went somewhere else to get the gun.”

That stat about prosecutions, by the way, doesn’t take into account local prosecutions, or plea deals. If a fugitive is scooped up lying on a background check form, he’s probably going to be prosecuted for the thing he’s on the lam for. But as Milwaukee Police Chief Edward Flynn pointed out to Sen. Lindsey Graham, prosecutions aren’t the point of background checks.

Cooper then reasons that “if you caught 15,000 people lying, why not extend the background checks, and you’re going to catch another 15,000?”

“Instead of that, Anderson, what we really ought to do is we ought to focus on keeping the guns out of the hands of convicted felons and people who have serious mental disease,” Risch replies.

Ding! To extend the earlier metaphor, that’s like saying instead of opening an umbrella, what we really ought to do is focus on keeping the rain off of ourselves.

“Convicted felons have friends and relatives who might sell them a gun anyway,” Cooper responds.

“Those people should be prosecuted,”Risch says. “We have laws against straw purchases now.”

Ding! As Anderson Cooper says, “From a logic standpoint (that’s a dirty trick, Cooper!), how do you know if they’re a criminal, or have a serious mental issue, if you’re not doing any kind of check, if their relative who is an idiot decides to sell them a weapon or their friend decides to sell them a weapon? If nobody’s checking, how do you know they’re a good guy or bad guy?”

“But that isn’t necessarily going to keep guns out of their hands,” Risch continues. “There’s over 300 million guns today in America that can be bought from anywhere,” Ding! They can be bought from anywhere because there’s no universal background check, “and even the conversation that’s going on now in bringing the bill that they’re talking about with gun shows is still going to leave a vast majority of sales without background checks.”

“If gun show checks, internet sales, that’s what the compromise people are talking about, is that something that’s acceptable to you, or does that go too far?” Cooper says.

“It isn’t that it goes too far,” Risch replies. “It’s just ineffective. They’re just not getting the job done. There are other things we really need to focus on and that is keeping guns out of the hands of people that shouldn’t have them.”

There’s a reason 90% of Americans support universal background checks, and this interview perfectly illustrates why. The best argument the 10% can muster against universal background checks amounts to an argument for them. The reason this interview works so well, it should be noted, is that Anderson Cooper resists the urge to pack in as many points as he can, and refuses to let Risch pass with contradictory, nonsensical responses. Every interview should be conducted this way, but if they were, I suspect it would be tougher to book these guys than it already is.