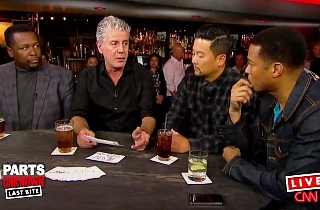 Some context: For a recent episode of Parts Unknown, host Anthony Bourdain had the opportunity to shoot an AR-15 rifle in the middle of the New Mexico desert. After firing off a few rounds, the celebrity chef found himself asking: “Why the hell would anybody need a weapon like this?”

That may sound like Bourdain is kneejerkedly anti-gun, but as he revealed in the intro to the CNN panel, he’s honestly not too sure there’s anything wrong with people owning such a weapon if they so choose. “I like holding guns, I like shooting guns,” he confessed.

Celebrity chef and author Roy Choi revealed that he was present during the 1992 Los Angeles riots. According to Bourdain, Choi’s family and neighbors used a cache of rifles to fend off rioters from destroying their family-owned Koreatown stores. “You had no support from police or local or city government,” Bourdain noted. “This was a clear example of the right to bear arms preventing utter, utter, utter devastation.”

Choi shared his own ambivalence on the gun issue, adding that “it’s about protection” in a violent and often-ignored Los Angeles inner-city culture. “Maybe we shouldn’t be talking about guns,” he suggested, “maybe we should worry about human rights.”

CNN anchor Don Lemon confessed that he has “evolved” on the gun issue from being staunchly opposed to many types of gun possession to “not wanting to be sitting duck.”

“If other people have guns and they’re not going away, I’m wondering if I should be armed,” Lemon said.

Bourdain posited that the level of discourse around gun control policy could be helped if people would stop comparing America with European nations like Great Britain. This prompted Lemon to add that it is also “unfair” to lump together the people who commit mass shootings along with law-abiding gun owners.

Actor Wendell Pierce suggested that the gun lobby enjoys when the fear around guns is elevated because it sells more weapons. “Everyone also gets a bit shrieky,” Bourdain countered, noting the calls for more gun control after any major shooting event.