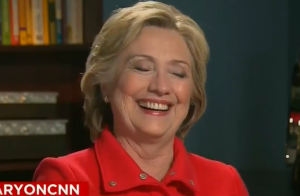 Conservative news website The Blaze and several Twitter users called Clinton’s reaction everything from “inexplicable” to “totally bizarre.” Considering that Tapper’s question was prompted by his referencing Bernie Sanders‘ line about her “damn emails” at the Democratic debate on Tuesday, it actually makes complete sense.

“I know Bernie Sanders said that ‘the American people are sick and tired of hearing about your damn emails,’ but there are lot of people who are not,” Tapper said amidst Clinton’s laughter. “Including FBI officials looking into whether or not national security was compromised.”

It makes sense because Sanders’ controlled outburst at the Las Vegas debate was actually pretty funny. Plus, Clinton’s “bizarre” behavior during this point of the interview is actually nervousness on her part, especially since Tapper didn’t bring up the incident just for the jokes.

Of course Clinton stuck to her committee-approved talking points, noting that nothing she read was marked classified (even though a lot of it was, both then and later). But the laughter totally makes sense.

If her laugh had resembled any of the horrific ones on display in a random Google image search using the key words “Hillary,” “Clinton” and “laugh,” however, I’d agree with its being bizarre.