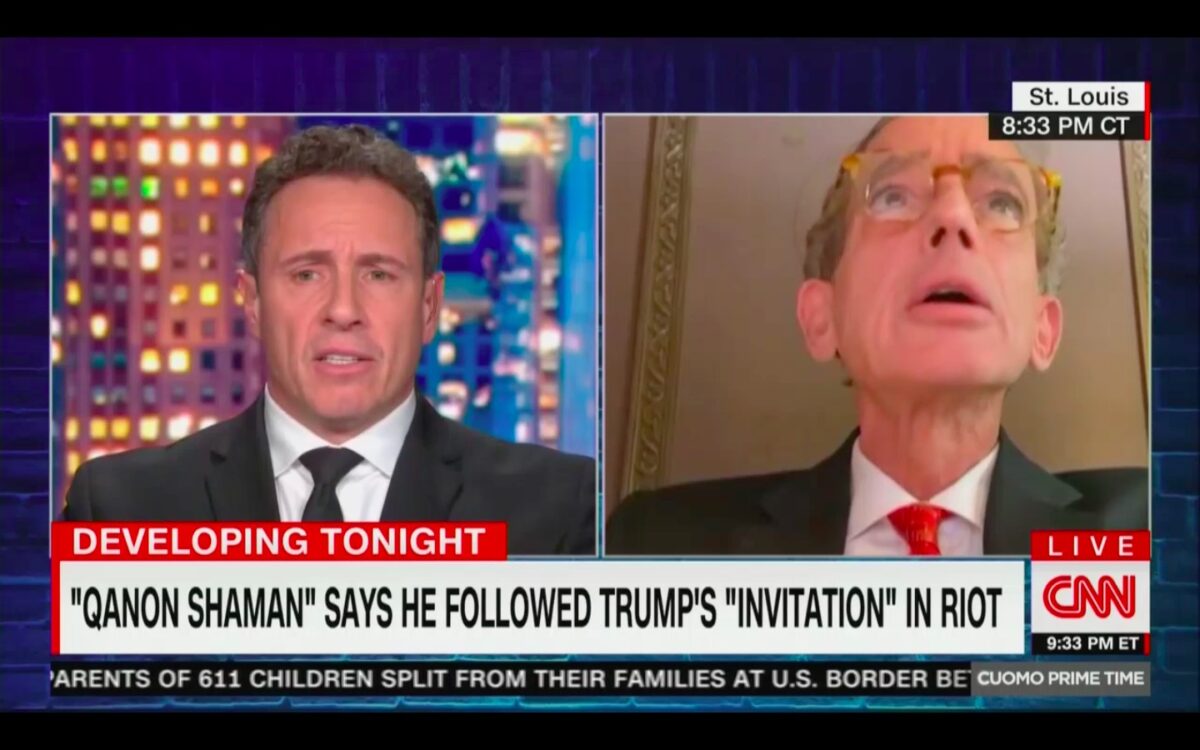 CNN’s Chris Cuomo conducted a truly bizarre interview with the attorney for the “QAnon Shaman” arrested for his alleged participation in the Capitol riots. The surreal conversation included a terribly glitchy audio feed, awkward webcam angles, comparisons between President Donald Trump and mass suicide cult leader Jim Jones, and an open plea for a presidential pardon for his client.

The interview with attorney Al Watkins was split into two segments because Watkin’s audio feed kept cutting out, and Cuomo eventually gave up and spoke to him by phone.

“Jacob Chansely wants a pardon from Trump,” Cuomo said to introduce the segment, showing scenes from the riots with Chansely, also known as Jake Angeli, with his now-infamous furry horned hat, red-white-and-blue face paint, and shirtless torso covered in tattoos.

“He calls himself the QAnon Shaman,” Cuomo continued. “I don’t know what that means and I don’t care.”

He then brought on Watkins and asked him, “Just to be clear, your client believes that he was invited to go, he was told to go, he was instructed to go by the commander-in-chief himself, Donald Trump. Is that accurate?”

“It’s very accurate to say that not only my client, but a large number of individuals, who were present felt like they were on a mission to be able to have their voices —” Watkins said before his audio began dropping off.

That didn’t work, and Cuomo asked Watkins where his microphone was. Then, in an absurd attempt at real-time technical diagnosis, Watkins began moving the laptop up and down and around in an attempt to improve the sound, all to no avail.

Cuomo eventually gave up and went to commercial break, and then brought Watkins back on by telephone.

“The QAnon Shaman, that’s what he calls himself, he’s the fool with the painted face and the weird horns on his head, he’s one of the people who decided to break into the Capitol, his attorney is on the phone with me now,” said Cuomo after the break. “Al, you can hear me, yes?”

“Yes, I can,” replied Watkins, his previous audio malfunctions now resolved. “I want to tell you it’s really important we should stop calling people fools because we have a large percentage of our population who spent a great deal of time in their lives hanging on every word of President Trump.”

Watkins argued that his client did not actually “break into” the Capitol, but walked in doors held open by Capitol Police, he “did not shroud his face in secrecy,” wasn’t wearing a bulletproof vest, was “not armed,” “didn’t have zip ties,” was a military veteran with “no criminal background whatsoever.”

Watkins described Chansely as someone who “like a lot of other disenfranchised people in our country felt very, very, very solidly in sync with President Trump.”

Cuomo pushed back on a few of Watkins’ points, saying he had only called him a “fool” because of his unusual attire and his belief in the QAnon conspiracy cult: “It’s not rational thought.”

Watkins retorted that Chansely “is a genuine shaman” and a “long-standing professor of that faith.”

Regarding Watkins’ claims his client was unarmed, Cuomo pointed out “he was walking around with a six-foot spear!” as video and photos from the riots were shown on the split screen with Chansely carrying a very large — and very sharp — metal spear, sometimes with signs attached to it and sometimes with an American flag.

Watkins then spoke at length about how Trump’s words had “meant something” to his client and many other people and now they were getting arrested, and then began openly calling for Trump to pardon Chansely, describing his client as “not a violent man…[h]e practices yoga, meditates all day long, couldn’t be a more gentle, soft-spoken human being.”

“Trump needs to stand up and own these people,” Watkins argued, those who went to the Capitol who “weren’t going to be violent…he owes them — he has an obligation to them.”

Watkins was pessimistic about his chances of securing a presidential pardon, however, and admitted he just figured it was worth a shot, making a bizarre comment that perhaps Trump would think favorably about his client — “what’s the name of the guy with the horns?” — and decide he would rather be “represented by the shaman instead of Rudy Giuliani.”

“Al, this is serious stuff we’re dealing with,” Cuomo scolded. “Your client is a little bit of a joke and asking for a pardon makes everything razor-focused how absurd this situation is.”

“I don’t know what the point is anymore, to be honest,” a somewhat befuddled Cuomo said. “Why does he believe what the president tells him? There has been no proof of any election fraud. The same reason he believes QAnon because he’s not thinking about what he believes.”

“In 1978 a whole bunch of people in San Francisco followed a guy by the name of Jim Jones down to Jonestown, Guyana –” Watkins began, referring to the cult leader who orchestrated the murder-suicide of over 900 people using cyanide-laced fruit drink mix.

“It was a cult!” Cuomo interjected.

“That’s right. And you know the only thing different here, there’s no Kool-Aid,” said Watkins.

The interview continued for a few more minutes and after Watkins was off the line, Cuomo looked in the camera and asked his audience, “How bizarre was that?”

Watch the video clips above, via CNN.