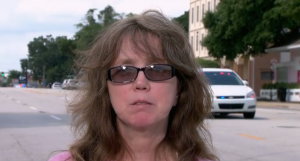 The mother of an Orlando club-goer is desperately awaiting word about her son, and her interview with George Stephanopoulos today was nothing short of gut-wrenching.

Florida police officers are working to address a mass shooting last night at the gay nightclub, Pulse but with fifty people dead and another fifty-plus injured, not all of the victims have been accounted for. Christine Leinonen told ABC that she’s been outside a local hospital since 4 A.M., and she sobbed and struggled to express her terror over not hearing from her son Christopher by now.

“[The police] said there’s a lot of dead bodies in the club, that its a crime scene,” Leinonen said through tears. “They can’t identify anybody, so it could be hours and hours before we find out.”

Leinonen said she last spoke to her son about her upcoming surgery, which she left off with “I love you, Chris.” She checked Facebook after waking up last night, and saw that one of her son’s friends lost him in the mayhem.

Leinonen was gasping by the time the interview was over, but she managed to talk about everything her son has done to advance LGBT pride:

“Can we do something with the assault weapons so that we can stop this… I beg all of you, please. I wanted to let you know about my son… Please let’s all just get along. We’re on this earth for such a short time let’s try to get rid of the hatred and the violence please!”