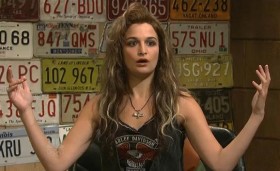 Just like a two-word heckle from Joe Wilson can hijack a Presidential address to a joint session of Congress, so, too, can a momentary slip from an eager new SNL cast member distract from the 35th season premiere starring Megan Fox and U2 — especially when that slip is the F-word.

Tonight Jenny Slate, in her SNL debut, played a biker chick who said “frickin'” a lot. Except at one point, she accidentally said “fucking.” As in, “Keep fucking that chicken!” Oops.

It was quick, and if your attention was diverted you’d miss it (as I did) — but the Internet collectively misses nothing, and sure as frick didn’t miss this. Gawker had it up 19 minutes after the show ended; Twitter and YouTube were already well on their way. Watch for “I fuckin’ love you for that” to become the newest SNL catchphrase.

SNL has a history of being quick to take down infringing YouTube clips, and I’m sure someone from NBC legal is on the horn with YouTube even now. But make no mistake: This is news, as fair as fair use can be. That won’t stop YouTube from taking the clips down, of course, but the point is, there’s no scrubbing this moment, however the West Coast airing is dubbed. Thanks to the Internet and the vigilant work of viewers, that genie is way out of the bottle. The, oh, twelve clips collected below are a testament to that. NBC may take ’em down, but no doubt many more are being eagerly uploaded in their place. It’s just how the Internet works.

So what will become of Jenny Slate? (This, btw, explains Seth Meyers with his arm around her protectively during the Goodnights. Aw.) Gawker’s Foster Kamer frets that Lorne Michaels will fire her, and no doubt there will be a fine of some sort by a disapproving FCC. But Slate is lucky, because tonight she shared a stage with Bono — who once dropped the F-bomb in similar excitement and innocence during the Golden Globes. Not only did they let him back on TV, but he was cleared of any obscenity charge. And that was during prime time! So Jenny Slate, despite swearing on live TV, should be fine. Which is good, because I fuckin’ love her for that.

Clips of the F-bomb below; full video of the “Biker Chicks Chat” sketch here.