What Do Bush and Obama Have in Common? Weak Democrats
video

What Do Bush and Obama Have in Common? Weak Democrats 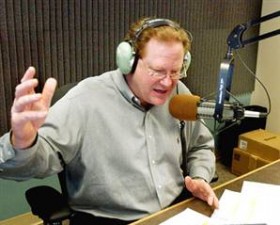 An exchange on The Ed Show tonight made me laugh out loud, as it will anyone who has been even casually following politics the last few years. Whether you lean left or right will determine the level of bitterness, but laugh, you will.

Ed Schultz was discussing the filibuster, and the way those cockadoodie Republicans keep using it to jam things up. Enter Senator Tom Harkin, who has a great idea how to get things moving again. Then, Ed asks him if any Republicans are on board. Put your drink down.

Tom Harkin is adorable! Come to think of it, so is Ed Rendell, who made the novel suggestion that the Democrats actually make the Republicans filibuster, “Mr. Smith”-style (or Billy Jack-style, if you prefer), and let the American people see them wasting our time on C-Span. Or something like this.

The funniest part of Harkin’s argument is that he proposed the change when Democrats were in the minority, so it’s all even-Steven, samey-samey. Republicans would stand to benefit if/when they are the majority again.

Harkin and Rendell seem to forget the gang problem in the Senate. Remember how there were always 7 or 8 Democrats ready to join Republicans to block Democratic filibusters during the Bush years? And remember how President Obama was barely in office when Evan Bayh launched a “Gang of 15” to obstruct his own party’s President? And remember when the Democrats had a 60 seat majority, and they couldn’t even get all the Democrats to join their Gang of 60 without weakening legislation and paying them off? I knew that you did.

The “Gang” problem in DC is only a problem for one party, and it only has one gang sign: a middle finger pointed at you.