Why the Hell Is MSNBC Airing Live Donald Trump Rallies? 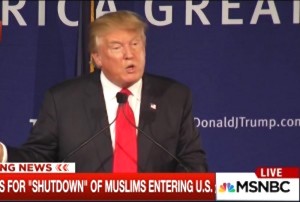 You could write a Harry Potter-sized book series on how the media has been screwing the pooch lately, and devote several volumes just to the handling of the Donald Trump campaign, but for the sake of space, please just answer me this: why would a news network devote almost an hour of weeknight prime time to airing a live Donald Trump campaign event?

That network is MSNBC, and they’ve actually been doing this for quite some time, but Monday night was a last straw of sorts. For the past few months, they’ve put Trump rallies on the air sporadically, usually on a Friday night, and usually consisting of standard Trump fare: readings of his poll numbers, insults of his rivals, and the occasional heckler. These were also all screwings of the pooch, but mostly because it was lazy and of poor news value.

What the network did Monday night, though, was both lazy and of harmful news value, and motivated by a desperate greed to compete. This wasn’t killing time on a Friday night. On the heels of Trump’s declaration that we should ban all Muslims from coming into the United States, the only reason to carry that rally live was in hopes that when Trump eventually said something awful, it would happen on MSNBC first.

I’m not one of these whiny people who says we shouldn’t cover Trump, or sanctimoniously put him in the entertainment section. I’m in the news business, I get the need to cover Donald Trump. In fact, that’s exactly what I wish MSNBC had done, instead of just pointing their camera at him and letting him rip.

For most of Monday night’s Hardball broadcast, viewers were treated to the unfiltered ugliness of Donald Trump, never even breaking for a commercial, and not even cutting in when it looked like Trump’s crowd was about to lynch their own reporter, Katy Tur:

It’s one thing to criticize someone’s reporting, but to physically single her out in a hostile, jeering crowd begged for some sort of intervention.

Instead, Chris Matthews and company just let it roll, and so MSNBC’s audience was also left with the distinct impression that the San Bernardino killers’ neighbors actually saw actual bombs in their garage, and didn’t report it out of political correctness:

“They didn’t want to report them because they thought it was profiling. Okay. They saw bombs. They saw pipe bombs. When a bomb is this long, got to put too many of them together for a bathroom, right?”

That would be frightening if it were true, but in reality, there was one guy who says a neighbor told him the killers worked in their garage late at night, but didn’t report it because (he says) she didn’t want to profile them. That’the entire basis for Trump’s claim that the neighbors SAW BOMBS and didn’t report it.

MSNBC also uncritically broadcast Trump’s claim that a large portion of American Muslims hate Americans, and want to do violence to them:

What I left out was Trump’s recitation of data from a shoddy poll by anti-Muslim activist Frank Gaffney, and which Trump conflated with the reputable Pew Institute, suggesting that a full one-quarter of American Muslims believe violence against Americans is justified. Again, this would have been a good time to cut in and explain that Trump’s data is bunk, but even viewers who stuck around until Matthews dipped out of the rally didn’t get any factual context, only analysis of how the Muslim ban “played” with the crowd.

These are just a few examples of the harmful “information” that MSNBC put out over its air live, all of which could have been covered properly with just a modicum of patience and professionalism.

That is not to say that other coverage of Trump has been great. There’s no earthly reason why cable news needs to interview Trump for almost an hour, but at least those afford an opportunity to apply journalism to the garbage that spews out of him (theoretically). Modern journalism is already horrible at pushing back against lies. It stands no chance if it doesn’t even try.