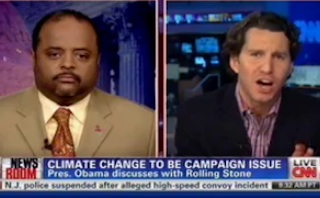 Roland Martin and Will Cain went toe-to-toe on CNN’s Newsroom over President Obama‘s recent comments to Rolling Stone‘s Jann Wenner that global warming will become an issue on the campaign trail and “he’ll be voicing (his) belief that we’re going to have to take further steps to deal with climate change in a serious way.”

“Okay so liberals might be rejoicing, Roland Martin,” host Carol Costello observed. “But some might say, why get into all of that when it’s the economy, it’s always about the economy?”

“There are conservatives also who recognize the need to deal with our climate,” said Martin. “Keep in mind that Newt Gingrich sat down with Nancy Pelosi to talk about this very issue. Bottom line is we can try to deny the reality of our climate in this country having a problem but at some point it will catch up with us. The problem for Americans, we are naturally reactionary. We wait for things to blow up. We wait for things to hit rock bottom before we go, ‘Hmm, now let’s actually deal with it.’ That’s always been our problem. Same problem on this story well.”

Cain slammed liberals for not wanting to have a debate on the topic and instead wanting to characterize Republicans as anti-science.

“It’s a very interesting admission by President Obama in that article that he recognizes the number one issue among voters is the economy,” Cain noted. “He won’t forget or let you forget that he spent the first six months debating a cap and trade bill on carbon emissions and restructuring one-sixth of the American economy on health care. He’ll double down this election cycle and talk about the climate again. Where is this importance of the economy that he recognizes that voters see? I don’t understand his dedication to that, Carol, let me say this why is this hot button? Because of this right here. There’s no debate the climate is changing. It would be odd if it didn’t. The debate is whether man is contributing to that change and we can do anything significant to affect that change and whether what we can do to affect possible man-made climate change is worth the cost. We won’t have that elevated debate. We won’t have those. We’ll listen to critical thinkers like Deborah Wasserman Schultz or Chris Matthews saying Republicans don’t believe in science and we’ll be done.”

Martin responded by saying he wasn’t listening to politicians on the matter, he was listening to scientists. He lamented the fact that jobs were being brought up to prevent action on various issues. “Any time you want to shut down any kind of conversation in this country when it comes to anything is jobs. When it comes to student loans cutting out the middle man, they say we can’t do that. It’s going to cost jobs,” Martin said. “That’s always the natural reaction. Can you deal — here’s the deal. I want to breathe, Will. I can’t go to a job if i’m having a problem breathing. If i’m having a problem when it comes to water. So, yeah, those things are important too.”

Cain hit back at Martin on the economic implications of dealing with climate change.

“If I accept your premise that man is causing climate change and cost don’t matter, let’s say this,” Cain responded. “If we put every person in the United States and for that matter the world out of work and halt all economic growth but we could clean up the air, would it be worth it?”

“That’s is the nonsense when we this this debate,” said Martin. “When you say put everyone out of work, that’s a nonsensical statement. So Will, don’t do the histrionics and try to earn an Academy Award right now for acting. Deal with reality!”

Watch Cain and Martin debate Obama’s comments below via CNN: