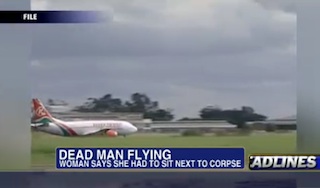 So, is anyone planning any fun vacations this summer? If so, are you taking a plane? And, if you’re taking a plane, are you planning on complaining about the long waits, TSA pat downs, bad (or nonexistent) food, or cramped seats? Well, don’t worry! Here’s an awesome story that will make your air travel experience seem like a breeze! I mean, chances are you’re not going to be forced to sit next to a dead guy, right?

Swedish radio journalist Lena Pettersson was settling into a flight to Tanzania when she noticed that the man sitting next to her seemed ill. That could have been bad enough (who wants to be stuck watching some guy puke into barf bags for a whole flight), however, things got worse when the guy up and died shortly after lift off.

“After the Kenya Airways plane took off, the man died, the Expressen reported. Cabin crew laid out the dead man across three seats and covered him with a blanket — but left his legs and feet sticking out, Pettersson said.

For the remainder of the overnight flight, Pettersson was forced to sit near the dead man, with just an aisle separating her and the corpse.”

The airline ended up refunding half of Pettersson’s ticket price for her troubles. Really though, l’d take a freshly dead row-mate over a crying baby any day of the week.

Watch a report on the story from Fox & Friends below. Really all the segment does though is make me marvel at just how many news stories have referenced Weekend at Bernie’s in the past year. Seriously, that movie’s gonna be relevant forever!