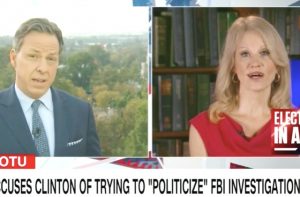 Jake Tapper pointed out to Kellyanne Conway this morning the fact that her candidate has been supported by racists and anti-Semites, and she was positively shocked at the question.

Tapper highlighted a Trump supporter last night shouting “Jew-S-A!” at the press and said, “We’ve seen a lot of anti-Semites and racists and misogynists who support the Trump candidacy.”

Conway’s reaction to this was to say, “Wow.” She was offended that Tapper would attempt to “besmirch” Trump supporters like that.

Conway did make it clear that the campaign condemns “deplorable” supporters like the one who shouted “Jew-S-A!”

Tapper pushed back and insisted he said no such thing, telling Conway that while the vast majority of Trump supporters have nothing to do with these hate groups, there has been a “comfort level” offered to racists and anti-Semites by the candidate himself.

This, again, shocked Conway, but Tapper said that Trump has done nothing to condemn his more deplorable supporters outside of very blasé “I disavow, okay?” statements.

Conway kept firing back and questioned what “the point of this conversation” is when there’s big Hillary Clinton news dominating the headlines.

Tapper explained to her that he spent quite a lot of time on that subject in his earlier interview grilling John Podesta.

Editor’s note: This piece has been updated to reflect that Conway was quick to condemn that “Jew-S-A” Trump supporter after being shown the clip.