CNN to Host Highest-Rated Democratic Debate Ever on Cable; Here’s Why 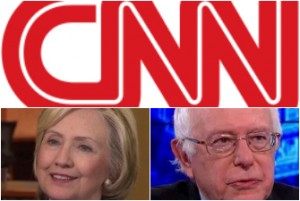 My prediction for the first Democratic debate, CNN, October 13: 10.3 million.

Big difference in the numbers, right? No big surprise there, as the Trump factor really is that huuuggge when it comes to bringing in casual political viewers and those normally not remotely involved in the process to the table. But apparently my 10M+ prediction is a bit aggressive in the eyes of two industry bigwigs I spoke to, as both believe the number will be more in the eight million range, with each citing past Democratic primary debate audience numbers as a guide.

In looking at those numbers closely, they’re quite interesting when juxtaposed against this year’s massive audience for Fox and CNN on the GOP side: The highest-rated Democratic debate ever occurred on April 16th, 2008 (Obama-Clinton) with 10.6 million tuning in to ABC (“free” TV almost always draws higher numbers than cable in these situations), and 8.3 million being the high watermark for cable (CNN in January of ’08). And when checking the October 2007 Democratic debate number (hosted by MSNBC at that time), the number at that stage of the campaign season drops to 2.45 million.

So the calculation by those in the industry for Tuesday night’s Democratic debate is a simple and pragmatic one: There is no candidate Obama (who took the country by storm in ’07-’08 as an electric, potentially historic figure) and Hillary is an established brand (and unlikable and untrustworthy to a majority of those watching at home). Bernie Sanders knows how to draw crowds in person, no doubt about that (20,000 for an indoor event in Boston last week, including an additional 8000 who stood outside), but his ratings on television for any interview he does are flat compared to other candidates not named Trump. As for Jim Webb, Martin O’Malley and Lincoln Chafee and their ability to move the needle, you’re free to finish this sentence any way you wish in the amiable comments section below. Then–as pointed out to me–there’s also the MLB playoff factor (Game 4 NLDS) that night featuring the two country’s two largest television markets: New York (Mets) and Los Angeles (Dodgers), which is competition Fox or CNN didn’t have to deal with during the first two GOP debates in August and September, respectively.

With all of that said, why the prediction here of two million above the highest-rated Democratic cable debate ever? To make the argument, let’s introduce another number into the equation: Investment…as in, are Americans much more invested in this election cycle than any other in years’ past?

According to a new CBS poll, the answer is a resounding yes. All told, 42% of voters surveyed say they’re paying “a lot” of attention to this presidential race. Last month, that number was at 36%. In 2007 at this stage of that election cycle, only 24 percent of voters say they were paying a lot of attention. The CBS poll also finds that 70% of voters say this presidential race was “interesting,” compared to just 40% who felt the same way in October 2011. Amazing jumps on both counts, and therefore two more reasons to believe the audiences will be higher than expected regardless of the party on stage.

A few more thoughts. Despite Hillary being seen in more of a negative than positive light (if the polls are any indication, where CBS has at 33 favorable/53 unfavorable), there still is a curiosity factor around her candidacy, and for all the wrong reasons. More than a few folks who vote Republican will be tuning in to CNN on Tuesday not to hear talking points on policy positions, but to hear Mrs. Clinton try to explain away her version of Etch-a-Sketch on pretty much every issue. Some will also watch to see if any of the others on stage–particularly Bernie–will finally go directly after Hillary on everything from her flip-flops and indecision on TPP and Keystone, respectively, to her private email server “mistake” and ethical shortcomings around the Clinton Foundation. The thought here is Mr. Sanders will take the high ground and tout his own record (while not exactly going the full-Trump on Mrs. Clinton), but won’t touch the email or Foundation controversies if the past 100 interviews he’s done are any indication. That will leave it up to the moderators (Anderson Cooper and Dana Bash primarily) to question her on any of those issues, and with only five candidates and two hours to fill, that shouldn’t be a challenge to do so.

When the dust settles and numbers tallied, the Nielsen result will land slightly higher than 10 million. If it doesn’t, you know where to find me.

Donald Trump won’t be there, of course, but you can be sure the name will be broached more than the sitting president’s (who will barely be mentioned). It’s tickle-down economics–the ratings version–with CNN and those eating up every word of this political reality show the beneficiaries.