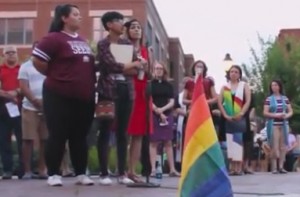 A peace vigil held in remembrance of the victims of the Orlando terror attack at the University of Missouri was completely derailed after one of the speakers began denouncing white attendees and an angry white couple began shouting back.

College Fix was on the scene and got it all on camera “I was really nervous to get up here because there’s a lot of white people in the crowd,” an activist said. “That wasn’t a joke,” she added after a few nervous chuckles.

She continued to complain that the large group of white people who had come out for the peace vigil never came out to support Black Lives Matter protests. “As much as it’s awesome that so many of you are here today, it’s like, who are you really here for?” she asked.

We’re here for everybody,” a woman yelled from the audience yelled to applause.

“We are here to be uniting, not dividing, which is what you are doing now,” another man from the audience yelled. He and his husband began a shouting match with the activists on stage, that ended when they were removed by security.

“Right here on this stage, they are segregating us as a community,” one of the men Carl Brizendine told College Fix after they were kicked out. “They are making it a racial issue. It’s not a racial issue at this point.”

Watch the exchange above, via College Fix.