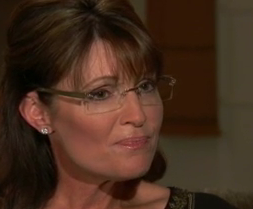 Sarah Palin would now like to tell you exactly what she’s reading.

Most Americans can still remember the seemingly throwaway question that then-VP candidate Palin tripped over: CBS Evening News anchor Katie Couric asking, “what do you read?”

In an interview with ABC’s Barbara Walters set to air tonight, Palin gives that question another shot–and shoots back at claims the former Alaska governor is uninformed:

“I read anything and everything that I can get my hands on as I have since I was a little girl,” Palin told Walters in an interview to air tonight on ABC as part of Walters’ “10 Most Fascinating People of 2010.”

So what books and newspapers currently top her reading list?

“I’m reading the best book right now — Dean Karnazes’s book about being an ultra-marathoner. I read a lot of C.S. Lewis when I want some divine inspiration…I read Newsmax and The Wall Street Journal. I read all of our local papers of course in Alaska because that’s where my heart is,” Palin said.

And no, she’s still peeved at Couric for asking that question–and for the way reporters seized on it as proof she wasn’t ready to play in the big leagues:

“Because of that one episode, that one episode, that would turn an issue into what it has become over the last two years. I think that’s ridiculous,” Palin told Walters. “That’s one of those things, where that issue…that I don’t read, or that I’m not informed, it’s one of those questions where I like to turn that around and ask the reporters, ‘Why would it be that there is that perception that I don’t read?'”

That’s “something that’s been pretty much ginned up by the press,” Palin said.