U.S. Senate Members Given Flashcards To Aid in Avoiding Press During Impeachment Trial 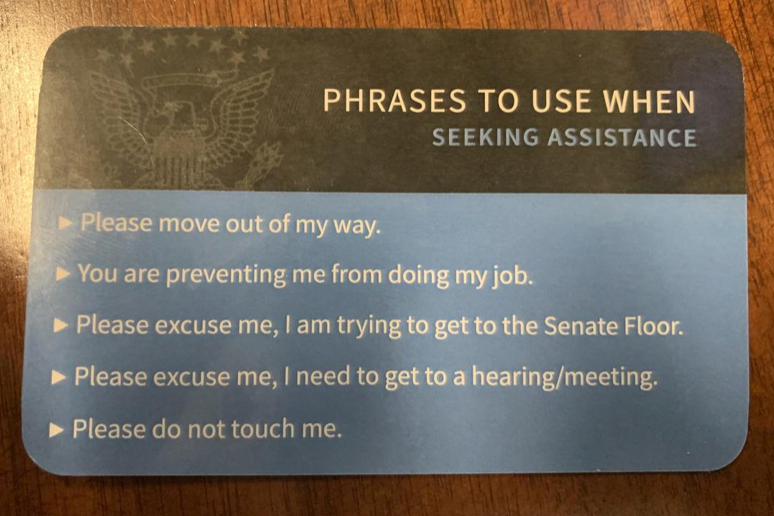 United States Senators have reportedly been given flashcards with five short phrases to help them evade reporters during the impeachment trial of President Donald Trump.

The Articles of Impeachment of President Donald Trump now reside in the U.S. Senate.

CBS News reporter Melissa Quinn tweeted a photo of one of the cards, and wrote that “Senators have been given a flashcard with suggested phrases to use to avoid reporters.”

The card featured scripted lines ranging from the innocuous “Please excuse me, I am trying to get to the Senate floor,” to other more strict phrases like, “Please do not touch me.”

Senators have been given a flashcard with suggested phrases to use to avoid reporters, per @caitlinconant and @Grace_Segers https://t.co/RVocWmrgq5 pic.twitter.com/1ANboUSVvB

Liz Johnson, the communications director for Senator Mitt Romney, stated that the tips on the cards were nothing new, but are typically used to deal with protesters.

CBS reported that, “It wasn’t immediately clear who distributed the cards. The Senate sergeant at arms and U.S. Capitol Police did not respond to questions about the cards’ origins. ”

CBS News’ Ed O’Keefe also reported on the cards, and noted “One thing it doesn’t suggest is calling reporters a ‘liberal hack.'”

JUST IN: @CBSNews /@caitlinconant obtain a flashcard being given to U.S. Senators ahead of the #ImpeachmentTrial on tips to avoid reporters. (One thing it doesn’t suggest is calling reporters a “liberal hack.”) pic.twitter.com/mAZpBP9Fv7

O’Keefe was referring to Senator Martha McSally, who appears to have come up with her own phrase, “You’re a liberal hack,” to CNN congressional correspondent Manu Raju.

THIS is how you handle FAKE NEWS @CNN.

O’Keefe further reported that “It is our understanding that it came from a nonpartisan entity.”

NRSC official Matt Whitlock tweeted that the phrases on the cards are “normally intended to be kept secret because the words act as code to CPD so I’ll be curious if they comment,” a reference to the Capitol Police.

These are normally intended to be kept secret because the words act as code to CPD so I’ll be curious if they comment.