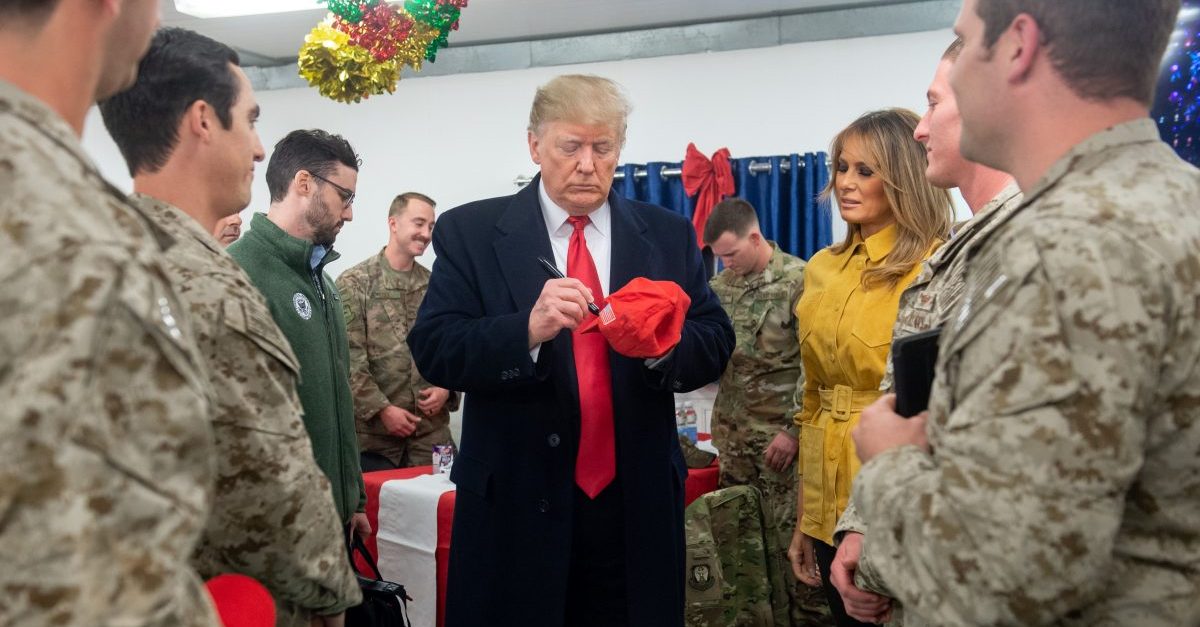 In a move that should surprise no one, shortly after news broke that President Donald Trump had visited troops in Iraq and Germany, his critics’ talking points quickly switched from”how dare Trump not visit troops in a combat zone” to “how dare Trump use troops for photo op/damage control.”

Keep in mind, as I write this I am still upset and disappointed in how Trump handled the resignation and subsequent ouster of Secretary of Defense James Mattis, but that doesn’t take away from how yesterday showed Trump can do no right in some people’s eyes.

As a veteran I see this as last minute desperation trip due to criticism not really from heart. He needed to go there much sooner. Using our military as props for his photo op is a disgrace

Troops are not props.

The only reason Donald Trump is in Iraq right now is that his people found out he’s the first “president” since 2002 not to be with the troops on Christmas Day.

We are props for his ego. Period.

How DARE you talk to those troops in #Iraq as if they’re all Republicans? How DARE you make any of them feel bad that they’re Democrats. How DARE you use them as political/campaign props. How DARE you lie to them about their pay. You, of all people, a draft-dodging COWARD. #Trump

In the case of recent challenger to Speaker of the House Paul Ryan, Randy Bryce, the reversal in his stance was put on display for all to see:

Here's @IronStache yesterday, RTing: "Trump became the first president since 2002 who didn't visit military personnel at a hospital or a military base around Christmastime."
—@IronStache today, when it turns out of the president did make a visit: "Troops are not props." pic.twitter.com/higOUwfDXC

Trump’s critics are hammering away at him for apparently being disingenuous with the troops when only hours before they were hammering away at him for not visiting them. His detractors once again became the very thing they sought to call out: disingenuous. And they did so by using members of the military, the people they claim to be standing up for.

Now, there are certain things on which to criticize Trump during the trip — by all means focus on those — yet it is hard to take some seriously when they have been caught using whatever was lying around to throw up against the wall, only to have it thrown back in their face.

But even then people are still getting things wrong, like those accusing Trump of exposing a “covert” Navy SEAL team in a video on Twitter. In short, he did not, as explained by Task & Purpose:

“Is it a secret that these guys are out there in that part of the world? No,” a defense official told Task & Purpose on condition of anonymity. “It’s been a little more sensationalized than we would’ve hoped.”

Simply belonging to a SEAL Team doesn’t make your every move “covert,” especially if you’re hanging out in the DFAC during the commander-in-chief’s visit.

All of this is to say that if SEAL Team 5 was deployed to Iraq on a covert mission, there’s no way in hell anyone, including conventional U.S. forces, would likely know they were there. I mean, Lt. Lee, the SEAL chaplain, was identified as a member of SEAL Team 5 in the public pool report and photographed by Agence France-Presse. No commander on an actual “covert” mission would ever let that happen…

Another theory being floated around is Trump threw the trip at the last minute together in order to save face. Completely ignoring how that would not make sense from a security standpoint, he did tell reporters he was planning such a trip back in November.

And it should be pointed out the audience that the trip was intended for did appear to appreciate the visit, despite what a recent CNN panel said:

Stars and Stripes reported over 200 airman stationed at Ramstein Air Base waited for hours in a hanger, past midnight, in order for the chance to interact with Trump.

It should also be noted these presidential trips are photo ops, no matter who does them. Personally, I don’t care if a president visits or not. It may come as a surprise, but that sentiment is not an uncommon feeling among those who have deployed (myself not included) and have been through exact or similar high-profile visits.