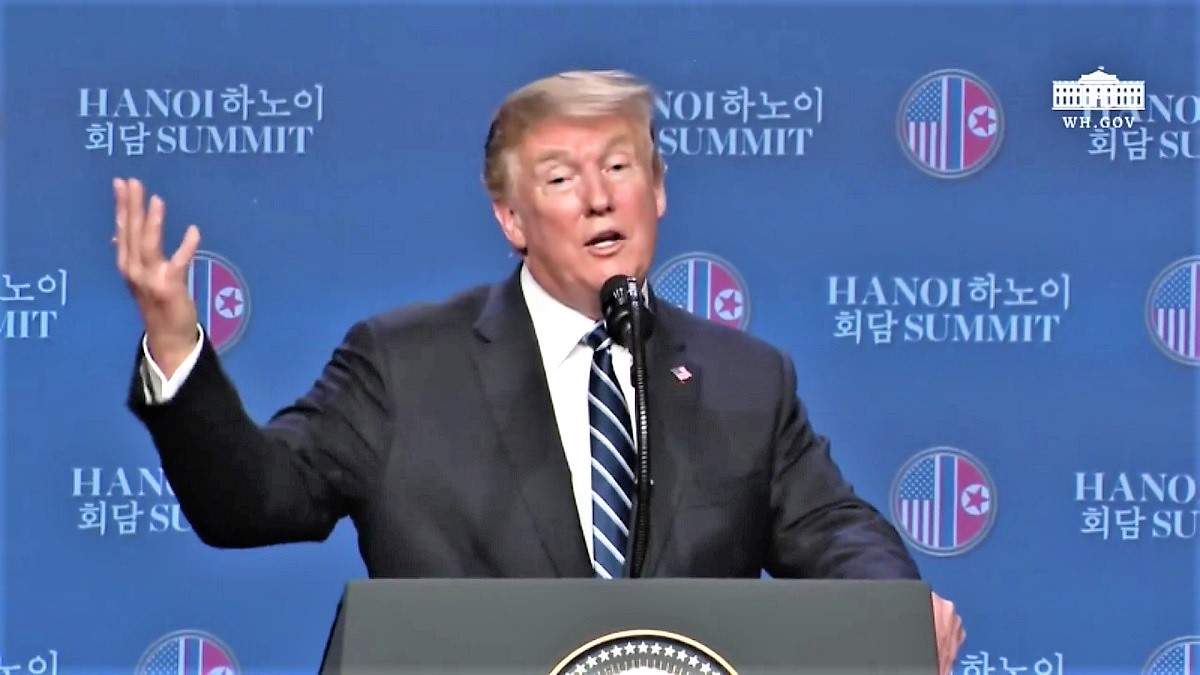 One of the few lasting memories of President Donald Trump’s failed attempt to make a denuclearization agreement with North Korea will be his stunning and outrageous comments regarding the horrific death of American student Otto Warmbier. Trump inexplicably told a worldwide audience that he takes North Korean dictator Kim Jong Un “at his word” that he had nothing to do with the capture and torturous murder of Warmbier.

When even reliable Trump sycophant Rick Santorum is ripping him for this “reprehensible” comment, you know we have reached a new level of absurdity (can you imagine how the bulk of the “conservative” media would have reacted if Barack Obama had ever said anything like that as president?!). But the important question remains, why did Trump say such a seemingly stupid thing in a way that was a huge victory for a murderous dictator?

In an attempt to answer that, many commentators have noted that this is hardly the first time that Trump has taken tyrants at their word, even when their story is dramatically contradicted by our own intelligence agencies. The most obvious previous examples being Russia’s Vladimir Putin and Saudi Arabia’s Mohammed bin Salman.

There is a natural and understandable tendency, especially in light of the investigation into Russian meddling in the 2016 election, to attribute some conspiratorial origins to why Trump appears to be so compromised by these type of leaders. However, while it is still possible that such factors may play a role in this pathetic phenomenon, I believe, particularly after watching Michael Cohen’s testimony yesterday, that there may be a far simpler explanation.

I believe Trump views human beings in an extremely narcissistic fashion. He evaluates their value based on how he perceives their possession of the characteristics which he personally values most.

They are, possibly in in order:

Now, some may argue, especially if you believe Cohen, that a person’s race also plays a key role in how Trump perceives them, but I have a slightly different take on that. In Trump’s mind, a rich, famous, powerful black person (O.J. Simpson, Mike Tyson, Herschel Walker, Omarosa, Kayne West, etc) is effectively colorless to him, with Trump “only” seeing dark-skinned “normal” people as inferior.

Clearly, Putin, Kim, and MbS all check off these critical Trump boxes to which I have referred. They are all insanely rich and famous dictators who have said nice things about him, and have the ability to do things for him that he perceives to be in his self-interest.

Therefore, in Trump’s mind, their words take on far more value than they should because our president is effectively hearing them through the prism of a fanboy admirer. Conversely, no one in our intelligence agencies is rich, famous, or powerful, so therefore, their words, in Trump’s mind, have very little significance. Unless, of course, they happen to benefit him at that particular moment.

While this theory of mine has been crystalized by viewing Trump’s actions as president, it has always been rather obvious (just watch a couple of old episodes of The Apprentice!) that this is the way Trump evaluates another human being’s value. In fact, the only time I ever met him, I did so with this exact concept in mind.

Almost exactly five years ago, we both happened to be backstage at NBC’s Today show (I had taken part in a significant interview with Matt Lauer the day before and the now-former host had asked me to stop by for a post-mortem of sorts). Because Trump had made some supportive statements about the very story I was there for (the “Penn State Scandal”) I wanted to pick his brain about the subject.

Instinctively, I knew that if I, a relative nobody with no entourage, had approached Trump on the street, he would have ignored me. But since we were in a small group of people backstage at the Today show, I knew he would intrinsically take what I was saying far more seriously, so I decided to give it a shot.

Sure enough, while our short conversation confirmed some my worst perceptions of the man, he treated me with a decent amount of respect and later, rather hilariously, sent me a supportive note, hand-written on the email that I had sent his assistant following up on our discussion. I am quite sure that never would have happened if he didn’t perceive that I must have a modicum of value based on the circumstances of our chance meeting.

Yes, some of that is perfectly natural, but with Trump, like so often is the case, everything is greatly exaggerated, usually to a comical degree. The problem here is that when he was just a celebrity this kind of behavior was merely amusing, but when he is president of the United States, it is downright dangerous.