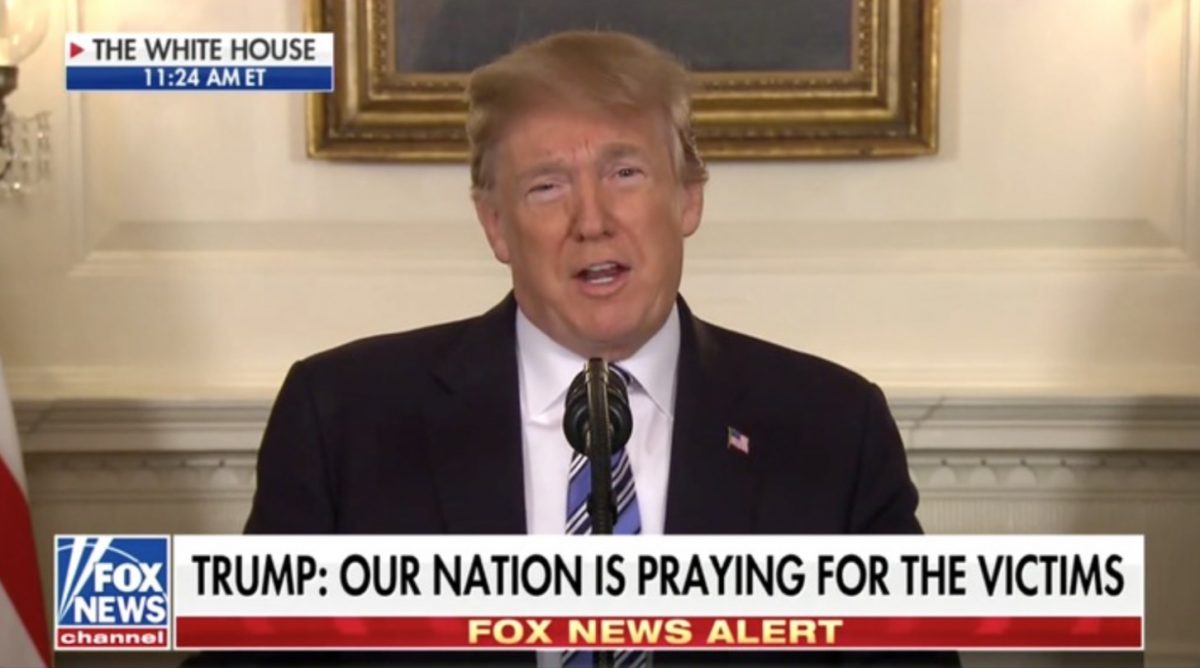 The time is long past to be delicate.

Look at this face. Is this the face of compassion? Of honesty? Of anything less than pure and utter hypocrisy, greed, and negligence?

If you answered “yes” to any of these questions, please for the love of God read on, because this bit of information serves as evidential proof that you are horribly misguided.

President Donald Trump, who suggested not mere hours ago that the school shooting in Parkland, FL was due to an inadequate response to mental health issues, passed a law just shy of one year ago that made it easier for people with those very issues to obtain firearms.

“We are committed with state and local leaders to help secure our schools and tackle the difficult issue of mental health,” Trump said Thursday, with great emphasis on those last two words, as if they were forced out of him.

The legislation rolled back restrictions set by President Barack Obama that added people to the national background check database who were receiving Social Security checks for mental illnesses, as well as people who were considered unfit to handle their own financial affairs. The Obama administration estimated that 75,000 names would be added to the database under these measures, but they never took effect, as Trump and a Republican-controlled Congress quietly voided them barely a month after the president took office.

Why did Trump do this and say what he said this morning? Because he’s in the pocket of the NRA. The “great businessman” who “speaks his mind” received over $21 million in campaign funding from the NRA during the 2016 election, with $12 million of those funds devoted to ads attacking Hillary Clinton.

Now let’s say, for argument’s sake, that the president – along with those who salivate over the Second Amendment – is actually suggesting that people being mentally ill has absolutely nothing to do with whether or not they ought to own a gun.

Consider that the Parkland shooter, Nikolas Cruz, wasn’t even allowed to carry a backpack to school and had to carry his belongings in a transparent Ziploc bag where authorities could see them. This is someone who we agree as a society should have access to an assault rifle? That’s not constitutional freedom; it’s lunacy of the highest degree.

Or maybe it’s both, in which case I’d rather have my constitutional rights limited than see Snapchat videos of screaming, cowering kids shielding themselves and their friends as bullets ricochet off desks and textbooks. It’s one or the other, make no mistake. It is one or the other.

How do I know? Because gun reform has saved countless lives both here and abroad. In Connecticut, common sense legislation decreased gun crimes by 40 percent. That state implemented those laws after 20 first-graders and six others were shot to death in school. Adam Lanza, the Newtown shooter, was a very sick individual, but there are very sick individuals all over the world who don’t have access to guns, and guess what? They don’t kill 20 children. They don’t have the means.

What’s more, there’s some really messed up stuff on Cruz’s social media pages, but there’s no evidence that he’s mentally ill, so Trump’s claim that mental illness is to blame for this horror has yet to be proven.

But I’ll tell you what has been proven: That Cruz used a murder weapon, which he bought legally, to slaughter innocent people in a place of learning. That we didn’t do absolutely everything possible to prevent this from happening not once, but 17 more times just since the beginning of this year is the true madness.

However, the NRA still has an iron grip on the GOP, which is why no one ought to be surprised that Donald Trump contradicted himself wildly today. He advocated for mental health reform while just a year ago he made it easier for people with mental health issues to hurt others. It’s hypocrisy in its purest form, he probably knows it, and he isn’t going to do a thing to stop gun violence in this country. So don’t hold your breath.