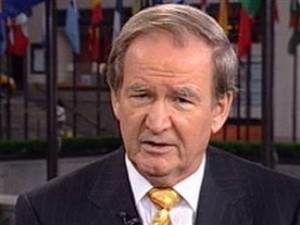 Reading what MSNBC President Phil Griffin had to say Saturday about the Pat Buchanan situation made me think about why this is happening.

“During the period of the book tour I asked him not to be on,” Mr. Griffin said. “Since then the issue has become the nature of some of the statements in the book.”

Mr. Buchanan argues in “Suicide of a Superpower” — which has the subtitle “Will America Survive to 2025?” — that the “European and Christian core of our country is shrinking,” which is damaging the nation “ethnically, culturally, morally, politically.” The book also contains a chapter titled “The End of White America.”

I haven’t read Pat’s book nor do I have any interest in doing so. But this is not new territory for Pat Buchanan to venture in to. He’s been on the edge of the paleocon xenophobic spectrum for a long time and anyone who has followed him even in passing can attest to this.

Certainly anyone who has dealt with Pat at MSNBC knows this. Pat has not changed. He may be a bit more vocal and shrill about it but he hasn’t changed his positions.

On the other hand, MSNBC has changed. It openly courts Progressive views and news. It puts out job ads asking for candidates with a progressive news background. Its pundit host class is all progressive and the network lets them show up en masse at the White House for off the record get togethers. The network is openly and aggressively courting the African American viewing audience so much so that it now notes how big it is in African American viewership in its releases.

Add all these things together and you now have a scenario where MSNBC, which used to be able to handle a Pat Buchanan and his intransigent controversial views, can no longer afford to do so without alienating core constituencies it covets. As Bill Carter wrote Saturday…

Mr. Griffin said, “The ideas he put forth aren’t really appropriate for national dialogue, much less the dialogue on MSNBC.” The network has set out to brand itself as a network designed to appeal to progressive and liberal viewers.

Phil Griffin basically copped to it. If you piss off MSNBC core demographic audiences and they start going nuts, as Color of Change did over Buchanan, you may end up being taken off the network, whereas five years ago such a tactic probably would not have succeeded.

And yet, this isn’t Michael Savage we’re talking about where some guy says something on MSNBC’s air that’s toxic. This is Pat Buchanan who is smart enough to moderate and modulate what he says on MSNBC vs. what he writes in his books. Buchanan in effect is being punished on MSNBC for something he didn’t do on MSNBC but is something that he’s been well known for by the people at MSNBC for years.

What I find ironic about this, and gave me the motivation to write up the headline the way I did (“MSNBC Comes Full Circle…Albeit Inverted” was the original headline on ICN), is with the Pat Buchanan situation MSNBC has gone and returned to the days of Phil Donahue and the run up to the Iraq War except it’s inverted because this time it’s not Conservative viewers MSNBC is afraid of alienating with Buchanan as it was nearly 10 years ago with Donahue…it’s Progressive ones.

Note – this post first appeared on Inside Cable News and appears here with consent.