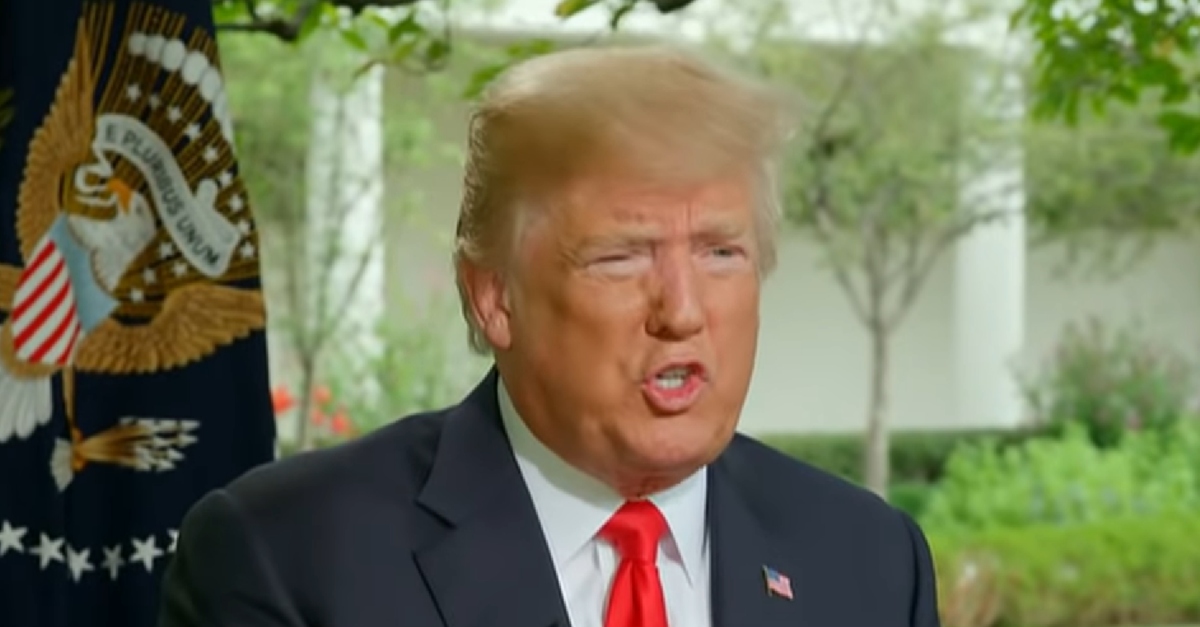 It is snowing in Washington DC this Sunday and President Donald Trump — who earlier today talked about the “beauty and majesty” of the White House in the snow — took to Twitter to poke at one of his perennial foes, Jeff Bezos.

“So sorry to hear the news about Jeff Bozo being taken down by a competitor whose reporting, I understand, is far more accurate than the reporting in his lobbyist newspaper, the Amazon Washington Post,” Trump opined leaving it unclear if ‘Bozo’ was a typo or an intentional insult. “Hopefully the paper will soon be placed in better & more responsible hands!”

So sorry to hear the news about Jeff Bozo being taken down by a competitor whose reporting, I understand, is far more accurate than the reporting in his lobbyist newspaper, the Amazon Washington Post. Hopefully the paper will soon be placed in better & more responsible hands!

Trump is apparently referring to a months-long investigation conducted by the National Enquirer into Bezos, the billionaire founder of Amazon and owner of the Washington Post.

CNN reported on the investigation that resulted in a blaring headline on the Enquirer’s cover about the cheating photos that allegedly ended Bezos’ marriage:

The Enquirer said it had been investigating Bezos for four months, tracking the Amazon CEO “across five states and 40,000 miles.” The tabloid said it had evidence that Bezos has been “whisking his mistress off to exotic destinations on his $65 million private jet.”
The Enquirer and other outlets identified the woman as Lauren Sanchez, a former anchor for Fox’s local station in Los Angeles.

David Pecker, the CEO of The National Enquirer’s parent company has long had a chummy relationship with Trump. Pecker even admitted that he paid $150,000 to Playboy model Karen McDougal in order to stop a story about Trump’s affair from coming out prior to the election. In December, Pecker received an immunity deal from federal prosecutors, a move that was thought to hurt Trump.

The New York Magazine has suggested the investigation — that Trump has since tweeted about —   may not just be a coincidence especially since “one of the three writers whose byline appears on the Bezos article” also was part of the immunity deal, Dylan Howard.

“The Enquirer clearly invested a lot in its takedown of Bezos, who, as the richest man in the world, is a fairly natural target for the tabloid,” the magazine wrote. “But it’s hard to imagine his position as a high-profile foil of President Trump’s didn’t factor into the Enquirer’s investment.

Update: After tweeting about Bezos, he followed up with another jab at a favorite foe, Sen. Elizabeth Warren.

If Elizabeth Warren, often referred to by me as Pocahontas, did this commercial from Bighorn or Wounded Knee instead of her kitchen, with her husband dressed in full Indian garb, it would have been a smash! pic.twitter.com/D5KWr8EPan