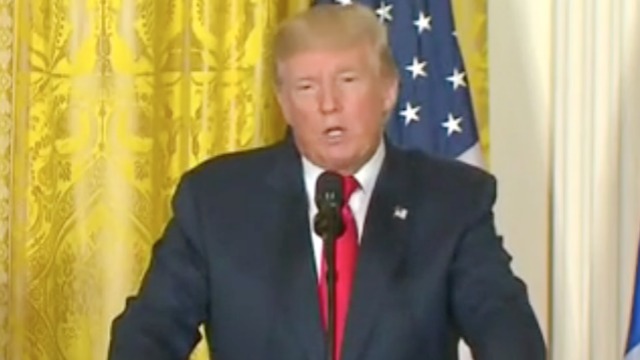 President Donald Trump shocked the world yesterday after it was reported he referred to El Salvador, Haiti and African nations as “shithole countries” during an Oval Office meeting on immigration reform. Today, in his first public appearance since the remarks dropped, will be signing a proclamation to honor Dr. Martin Luther King Jr. live at 11:30 am EST. (not a joke).

The proclamation will honor Dr. Martin Luther King Jr. Day, which falls this Monday, January 15. It is unclear if he will make remarks or answer any questions from the press.

In the meantime, Trump has seemingly denied making the comments at all. He took to Twitter this morning to flood the social network with a series of tweets on DACA and immigration reform and dropped this nugget on Haiti.

“Never said anything derogatory about Haitians other than Haiti is, obviously, a very poor and troubled country,” he wrote. “Never said ‘take them out.’ Made up by Dems. I have a wonderful relationship with Haitians. Probably should record future meetings – unfortunately, no trust!”

Sen. Dick Durbin, however, was at the Oval Office meeting and has stated on numerous occasions that the president did indeed make those comments, calling his words “hate-filled, vile and racist.”