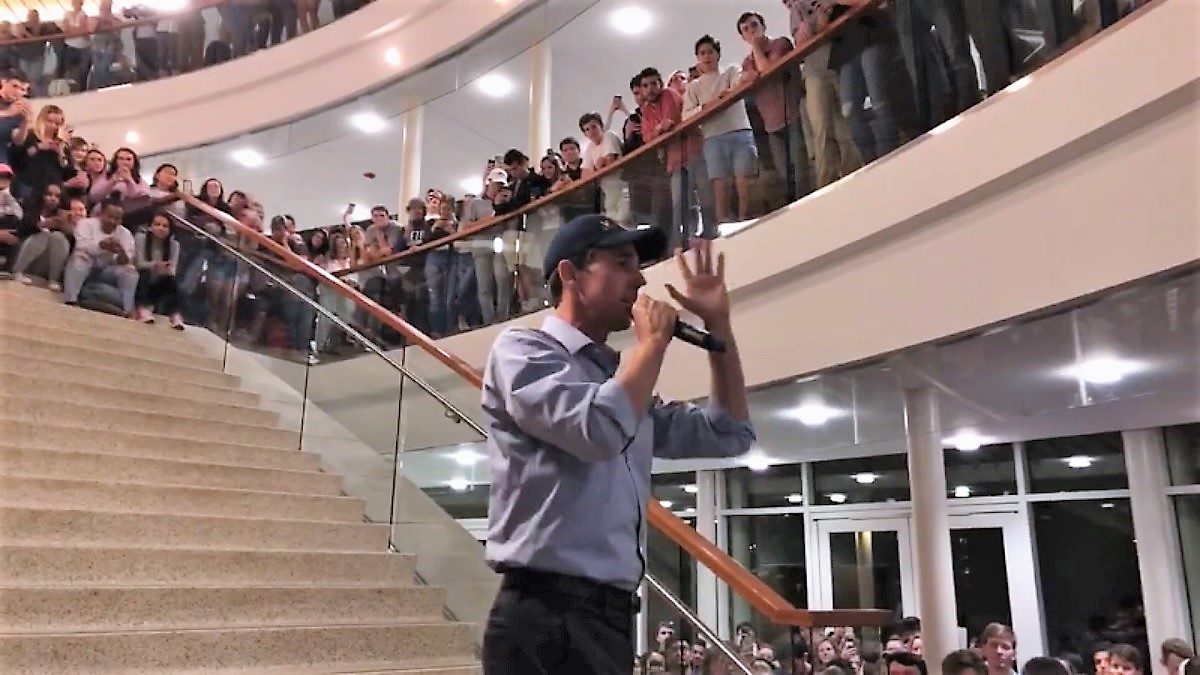 Former Texas Congressman and current Democratic presidential candidate Beto O’Rourke was asked for specifics on protecting abortion rights and his support for the Equal Rights Amendment, and while he said a lot of words in response, came up empty on the specifics.

During a town hall event at The University of Virginia in Charlottesville Tuesday night, a student named AnnMarie asked O’Rourke for specific legislative solutions to state laws outlawing abortions as early as 5 or 6 weeks into pregnancy.

“I believe there are now six states where it is illegal to get an abortion after a heartbeat is detected, which most women don’t even know they’re pregnant by that time,” she said, and asked “what your plans are to address that in a way that will actually result in legislation, or some form of action, so that that’s not an issue women will face?”

O’Rourke replied by repeatedly citing the Supreme Court decision in Roe v. Wade, and noted “We know, in Texas, what happens when we deny that right. A quarter of our family planning clinics were shut down. For such a long time, there was no Planned Parenthood in El Paso.

O’Rourke went on to speak about a “crisis in maternal mortality in our state and in our country” that “is three times as deadly for women of color,” and said that “when we say Universal Health Care, we’ve got to mean universal health Care for every single one of us.”

“When we say that we are a nation of laws, we’ve got to respect that decision dating back to 1973,” O’Rourke went on to add, saying that that “means that every woman should be able to make her own decisions about her own body, and importantly, have access to the healthcare that makes it possible. That’s my position.”

While he didn’t actually say this, his answer heavily implied that he would appoint Supreme Court justices using Roe as a litmus test, but beyond that, offered none of the specifics that the young woman asked. He didn’t offer his own legislative solution, or mention the bills in the current House and Senate that would require all insurers, including the federal government, to cover abortion care. Those bills, introduced by Rep. Barbara Lee (D-CA) and Sen. Tammy Duckworth (D-IL), would effectively repeal the Hyde Amendment.

Later in the evening, a student named Henry asked O’Rourke whether he supports the Equal Rights Amendment. He said he was asking on behalf of his sister, who had missed an opprtunity to ask the question at a past event.

“Her question was, do you support the Equal Rights Amendment, and… if you support it, what role will your Department of Justice play in making sure that it is recognized as constitutional?” he asked.

O’Rourke began by talking about the goals of the ERA, saying “Still in this country, in the year 2019, women are paid a fraction of what men are paid for doing the same job, providing the same value, working the same number of hours.”

He went on to say that “yes, we should fight for equal pay, equal justice, and equal rights for everyone regardless of your gender, your sexual orientation, your race, or any other difference that does not matter.”

But then, O’Rourke offered only qualified support for the ERA, saying “And if the only way to make that happen is an Equal Rights Amendment to the Constitution, it will have my support, and I will do what I can to speak to it’s wisdom and its power to those states who ultimately decide its fate in their state conventions.”

The ERA was introduced in the 1920s and passed Congress in 1972. There are glaciers that have decided whether or not they support it.

On both questions, O’Rourke seems to have a hammerlock on the right things to say about the issues, but an unwillingness or inability to engage on the specifics. The crowd seemed pleased woth his responses, but when the Democratic field moves to the debate stage, that could change quickly.