For 2nd Debate in a Row, Twitter Can’t Get Enough of Marianne Williamson: ‘Outshining Most of the Candidates’ 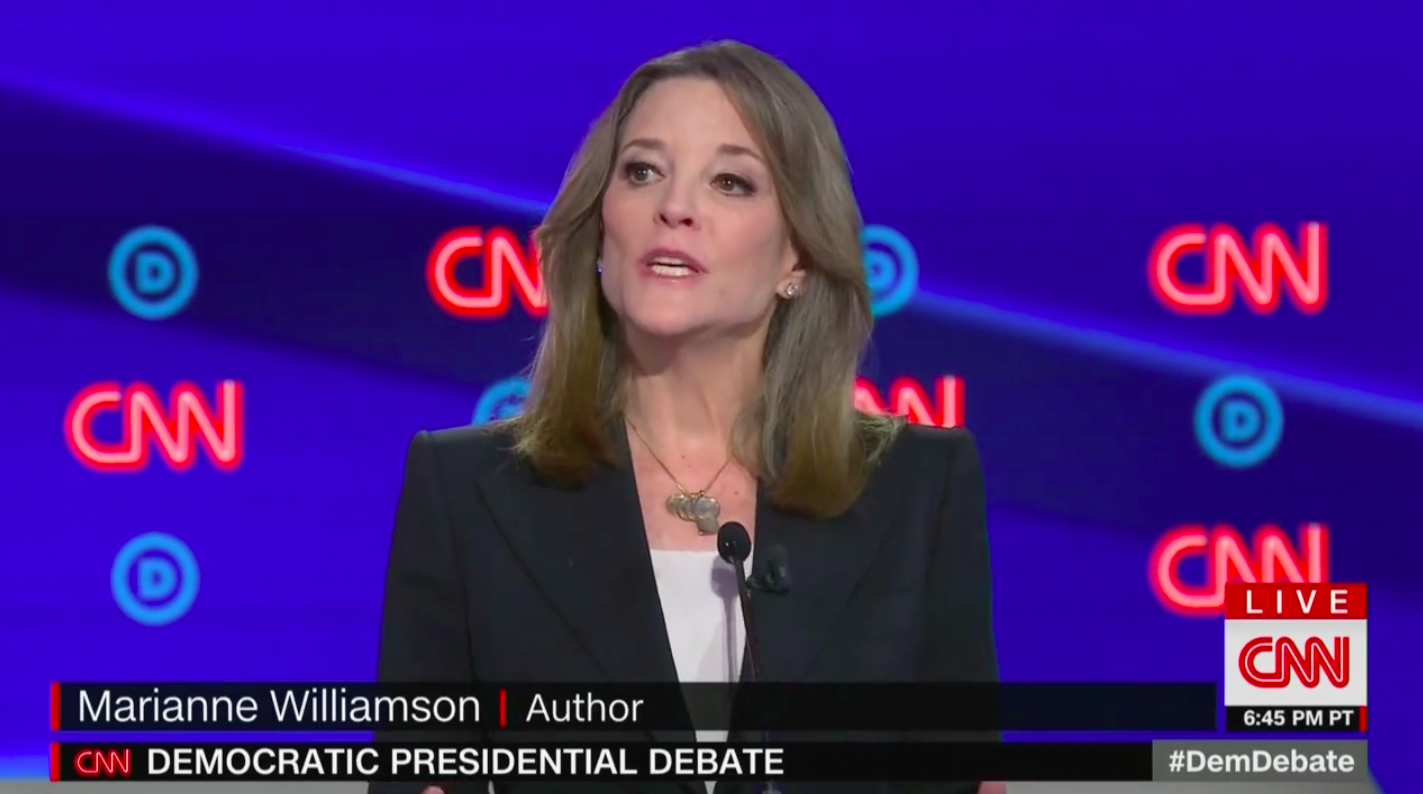 While 2020 presidential hopeful Marianne Williamson was widely considered a non-serious candidate going into the DNC’s second round of debates on Tuesday, the self-help author quickly set herself apart from the rest of the Democrats on stage and received huge applause lines for her commentary on issues ranging from “dark psychic forces,” to slavery reparations.

Williamson’s two biggest applause lines came during her commentary on race during the course of the Democratic showdown in Detroit, as the CNN hosts asked her how she would deal with the environmental racism in places like Flint, Michigan. Though, the debate moderators failed to ask Williamson about her anti-science views, particularly on the issue of vaccines, which she has routinely questioned the need for.

“What happened in Flint would not have happened in [the white neighborhood of] Gross Point, this is part of the dark underbelly of American society, the racism, the bigotry, and the entire conversation that we’re having here tonight,” the self-help author said during her first major applause line.

Later in the debate, Williamson received much praise for demanding that $200-500 billion be reinvested into the black community to make up for “40 acres and a mule” that slaves were promised after the Civil War, but never received.

“There was 4 to 5 million slaves at the end of the civil war, and they were probably 40 acres and a mule for a family of four, if you did the math today it would be trillions of dollars, and anything less than a hundred billion dollars is an insult and 200 to 500 billion is politically feasible,” the self-help guru said as they auditorium erupted into cheers.

After these viral moments, Williamson’s name shot to the top of Google’s search trends — topping overall searches when compared to the other candidates in the debate.

Williamson’s big moments of the night ended up being the main aspect of the debate discussed on Twitter, as her name became the #1 trend in the U.S. more than once throughout the event. Some sincerely praised Williamson, including Donald Trump Jr., journalists, and press staffers working for rival candidates such as Sens. Kamala Harris and Bernie Sanders, while other continued mocking her or ironically suggesting she will be the strongest candidate to run against President Donald Trump, given that she is currently the only 2020 hopeful confronting the “dark psychic forces” in America.

Williamson’s name even became the top Google search trend of the candidates that participated in the debate.

Check out a few of the top reactions below:

Williamson legit outshining most of the candidates on that stage

Williamson gets big whoops and cheers from the crowd as she goes all in on reparations. I’m telling you, man.

Marianne Williamson is like if the trailer for the movie #Cats became a person. #DemDebate

marianne shouldn’t be called the crazy one in this race, her answers have been much better than several others here. this is a good forum for her

People are gonna think that I’m trolling but compared to what else is up on this stage I think Marianne Williamson is actually winning this thing. This is amazing. No question she seems to be drawing the biggest applause of the night.

Glad Marianne didn’t take Sam Bee’s advice and drop out. Unlike many on this stage, she’s contributing something. https://t.co/gn7Ix6rIhi

Jesus Christ, is Marianne Williamson going to win this debate?

I’m watching this debate in a Crown Heights bar and, without question, Marianne Williamson has gotten the most applause of the night. People are shushing when she’s (seldom) called upon by the moderators

Marianne: “IF YOU THINK THIS WONKINESS IS GOING TO DEAL WITH THIS DARK PSYCHIC FORCE…” pic.twitter.com/j7AdWcn5RD

Marianne is the only candidate brave enough to talk about the dark psychic forces and confront them ?

Before and after: the #DemDebate in search.