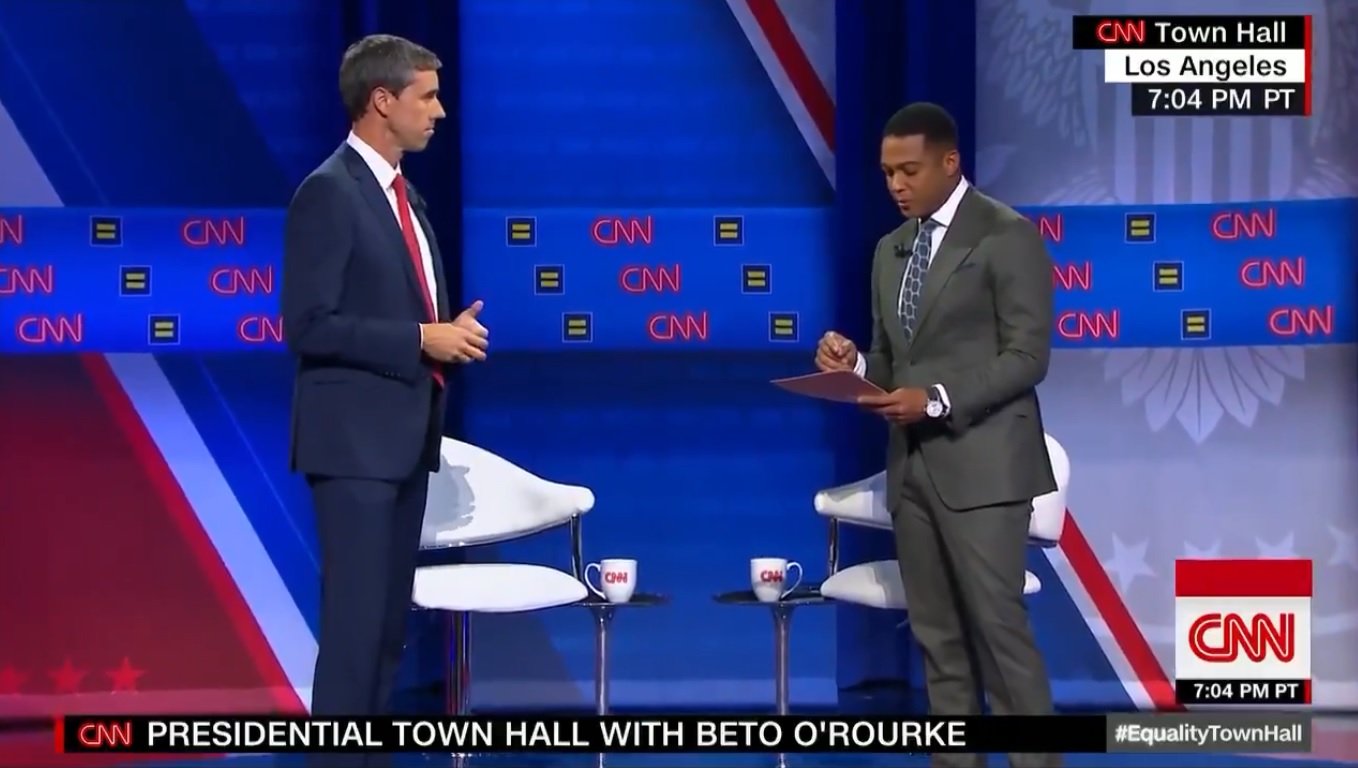 After O’Rourke was asked during the CNN Equality Town Hall, Thursday, whether “religious institutions like colleges, churches, charities” should “lose their tax exempt status if they oppose same-sex marriage,” O’Rourke replied, “Yes.”

“There can be no reward, no benefit, no tax break for anyone or any institution or any organization in America that denies the full human rights and the full civil rights of every single one us,” he declared. “So as president we’re going to make that a priority and we’re going to stop those who are infringing upon the human rights of our fellow Americans.”

Journalists and commentators, however, pointed out that O’Rourke’s plan would be unconstitutional.

“This would be plainly unconsitutional. State cannot tell church which rituals to perform or not perform,” commented The Atlantic‘s Adam Serwer. “I’m sure there are some people on the left who *think* this might be a good idea but it isn’t, because it breaches the very wall between church and state the left wants to maintain.”

This would be plainly unconsitutional. State cannot tell church which rituals to perform or not perform. https://t.co/3xMa1A0qUN

I’m sure there are some people on the left who *think* this might be a good idea but it isn’t, because it breaches the very wall between church and state the left wants to maintain.

Here’s a sampling of the other criticism:

Rarely have I seen a candidate commit so completely to running against the Bill of Rights. https://t.co/JALW5P11SW

If you're running for high office, please at least give us the impression that you have 1. Heard of the Constitution and 2. Have some idea what's in it. https://t.co/I55umZCMt2

Just as in Australia, Britain, and New Zealand, American advocates for gun confiscation are also advocates of speech restrictions. https://t.co/I45jZJvvEn

What makes this even worse is how unhesitating Beto was in saying he will give or take away tax breaks based on different political views. There was no pause or thought at all.

*whispers* separation of Church and State means the State cannot tell the Church what to do, so this would be unconstitutional.
Don't @ me. I didn't write the Constitution. But I neither want to live in a theocracy nor a country that selectively penalizes some religions. https://t.co/KVynchS3tO

O'Rourke's proposal would violate the constitutionally protected rights not to have a government benefit denied based on religious exercise or viewpoint.

Living in a free country means neither O'Rourke nor anybody else can impose religious beliefs on others. That's good. https://t.co/UBPRmgVZfu

it's hard to see how this would work with the 1st amendment. seems better to focus on passing legislation protecting LGBT ppl in government, workplace and public life…. https://t.co/VyrruuGU00

This is a bad, and blatantly unconstitutional, idea. You can argue that tax breaks should be taken away from all churches. But you can't make the tax break contingent on whether a church meets some ideological litmus test. https://t.co/lkVPVucXLq

"The light that burns twice as bright burns for half as long – and you have burned so very, very brightly, Beto." https://t.co/4JCAqBjNa2

Demanding a ceremony in the church of your choosing is now a "civil right." https://t.co/0HhID2QEhF