Tulsi Gabbard Stokes Feud With Hillary Clinton in New Video: ‘Your Foreign Policy Was a Disaster… Step Down From Your Throne’ 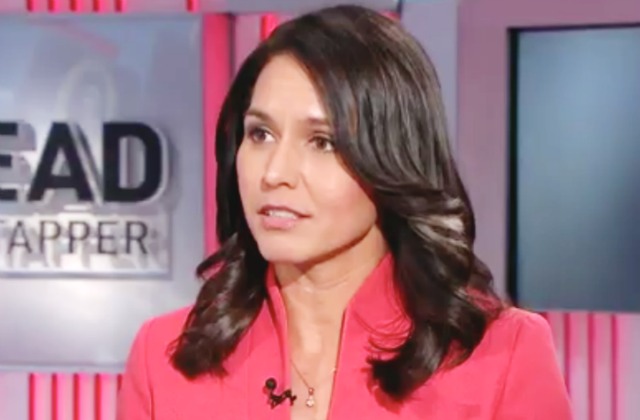 Democratic presidential candidate Tulsi Gabbard lobbed another online salvo in her running feud with Hillary Clinton, posting a video to Twitter that blasted the former Secretary of State’s foreign policy as a “disaster” and admonishing her to “step down from your throne.”

.@HillaryClinton, your foreign policy was a disaster for our country and the world. It’s time for you to acknowledge the damage you have caused and step down from your throne. https://t.co/2cWI54lf6Y pic.twitter.com/h2fl7ox0Rv

Gabbard, who is currently polling at 1.3% nationally and at 2.0% in Iowa and New Hampshire according to RealClearPolitics, has been verbally sparring with Clinton for several days after the former senator strongly implied during a podcast that the Hawaii Congresswoman was a “Russian asset.”

In her latest video, Gabbard makes a number of broad, sometimes confusing claims about Clinton’s “foreign policy,” offering few specifics. Much of her argument that Clinton’s policies have “devastated entire countries” with “millions of lives lost” seems to allude to the Bush administration’s disastrous 2003 invasion of Iraq over false WMD claims, which Clinton, as a then-New York Senator, initially supported. At one point, Gabbard attributes to Clinton “an exacerbation of the problem of nuclear proliferation by overthrowing [Muammar] Gaddafi in Libya.” Libya’s nuclear weapons program was voluntarily dismantled in 2004, six years before Gaddafi’s ouster in 2010, when Clinton was Secretary of State and subsequent IAEA inspections since 2010 have found zero evidence that Libya has restarted a nuclear program. And the Obama administration, after Clinton left the cabinet, signed a landmark nuclear nonproliferation deal with Iran in 2015.

While Clinton still holds enormous sway among many Democratic faithful, she currently holds no position in the party from which to “step down.” But the failed 2016 presidential candidate does provide a useful foil for a candidate struggling to gain traction in a large 2020 Democratic field.