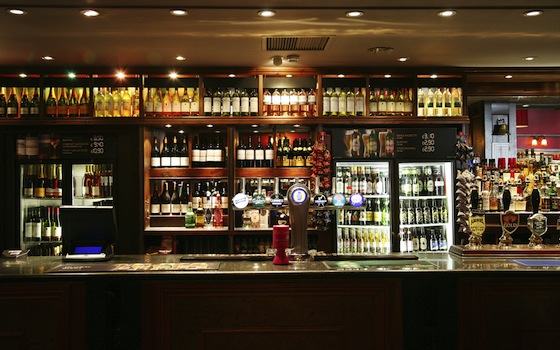 Earlier this week Huffington Post reporter Elise Foley started innocently tweet-shaming DC for having ridiculously obvious bar names. Policy, Recess, and Recessions are all real-life DC bars, she pointed out, tweeting “nerds, all of you!” DC being chock full o’ nerds is definitely nothing new, but who knew the nation’s fine capital was also teeming with meme-busters ready to fill the letter, number, and diagonal State-named streets with even dopier drinking establishments?

Even this editor right here, a DC native, was not expecting #FakeDCBars to turn into such… a thing. But our friends down I-95 had other ideas. Here we are two days later and the followers are still eking out their ideas before the weekend. (They know none of these bars will exist this weekend, right?).

Here’s a sampling of our favorites from the food scene meme du jour. The originator owned her brainchild, making the list twice, and her first is our favorite. We would def have bloodies with Elise at The Furlough. Call us?

DC’s hottest new club is Sequestration, where your tab keeps growing even as they serve you less and less. #fakedcbars

I can’t seem to find Transparency. It was suppose to open in 2008. #FakeDCBars

The True Facts About DC Variety:

The Decently Priced Place Nearby With Good Food and Drink That Has Listenable Music, Smart Talkers and Absolutely No Douches #fakeDCbars

“So….what do we do now?” I ask my friends. Theodora slips an arm around my waist. “Wanna get a drink at Crisis?” #FakeDCbars

#FakeDCBars glass warfare: where some guy is allowed to cut to the head of the bar’s line

*Full disclosure, I know this dude.

“Totally messed up something at work. Meet me at the Burned Source?” #fakedcbars

D.C.’s hottest bar is PotoMacDaddy. This bar has everything: janitors, a guy who thinks the Newseum is cool, human chili bowls…#fakedcbars

The Original, And The Best:

“I’ve got nothing to do today, want to meet at The Furlough at noonish for bloody marys?” #fakedcbars