Around the World in 80 Plates: Episode 2 Recap

Around The World In 80 Plates Recap: Allez Moutons! 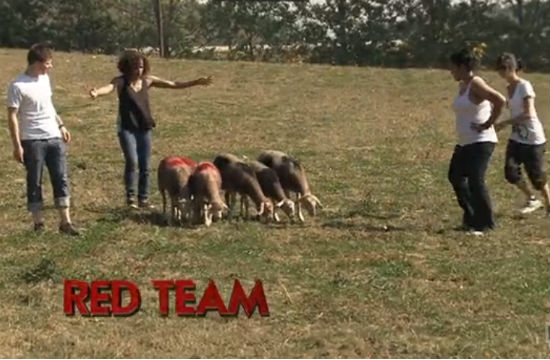 This week the Ryan Seacrest of food TV hosting, Curtis Stone, took us, his co-host Cat Cora, and his merry band of cheftestants to Lyon, France for the second installment of Around The World In 80 Plates. How did the chefs fare in the birthplace of gastronomy? Read on to find out!

Chaz, because he was the MOST VALUED CHEF from last week, got to pick his own team to run with in Lyon. After a quick train ride from London, the chefs arrive with much discussion of French cuisine, culture, and the language barrier. Chef Sai basically tells France to go fuck itself, culinarily. Oh, did you guys not know that Asian cuisine is the best? It so is. It’s so good, Sai didn’t even bother learning western cooking techniques. Poaching an egg? Not important. Asian technique is so much cooler and better than egg-poaching.

…Yeah, everyone likes Sai about as much as you would imagine.

Upon their arrival by rail, chefs pile into cars to drive themselves to a remote country location. An elaborate honking system is devised to prevent losing track of each other, but, of course, everyone still ends up totally confused.

The Red Team arrives first and learns that the first part of THE COURSE is to identify an unimaginable number of cheeses laid out by a fromager in a neckerchief as either sheep, goat, or cow’s milk cheese.

Jenna immediately takes the lead on this challenge, which we don’t really understand, because, as it turns out, she knows literally nothing about cheeses. The only thing she knows how to do is speak in an assertive tone of voice. We, meanwhile, were in heaven imagining all the tiny bites of joy she was testing trying to get the combination right. Oh, Jenna is the only Red Team member who speaks French, so she decides she’s the leader.

The Black Team gets their combo correct basically on the first try.

Next, teams have to herd four lambs into a pen without touching them. (Whaaaat? So cuuuute!). The catchphrase “Allez moutons!” is born. This gave Jenna a chance to continue to be obnoxious while she sat out and supervised (or “motivated,” as she called it). Cheven majorly drops the ball by allowing three caught sheep to escape when it’s his job to watch the pen.

And, finally, the third part of THE COURSE involves matching wine with plates containing the foods that make up their flavor profiles. Yeah, taking that wine course your senior year of college totally would have come in handy! JUST KIDDING, because wine tasting is completely subjective, as is evidenced by the fact that Nookie wins the challenge with math. Because he’s clearly not winning it with the sensitivity of his wine palette as the executive chef to the Boston Red Sox.

Black Team wins and therefore is granted THE EXCEPTIONAL INGREDIENT. Except Bravo sucks at consistency, so, in this case, the exceptional ingredient is just a MOF-cooked meal full of dishes traditional to Lyon. You know how we feel about MOFs. (We love them. And their fancy collars!) The losing team has to find their own examples of Lyonnaise cuisine by wandering the city. And, of course, as the only French speaker, Jenna gets to run her mouth some more.

THE TAKEOVER begins, and quenelles seem to be the big deal dish. It’s basically gefilte fish in a really fancy sauce, so it’s easy to mess up, but the Black Team with their MOF-training cooks them much better than the Red Team.

Gary, who infamously changed the name of the takeover pub back in London, earning himself seven years’ bad sex or whatever, is doing front of house again. And they let Nookie handle foie gras. Seriously? The baseball guy gets to do foie? Does he make anything other than beans and hot dogs? Does he use math to make foie delicious, too? We’re shocked, but the diners love it. One of them calls it the best foie gras he’s ever tasted.

The Red Team bombs on their quenelle execution, but successfully pulls off their other authentic dishes. Black Team wins, though, and Avery is crowned MVC for her perfect quenelles. We’re still trying to Wikipedia why these are such a big deal.

The Red Team lost because their service was slow and they ran out of fish, so it comes down to two of their poopy chefs. Does Sai go home for taking two and a half hours to complete service on a salad with four components (BECAUSE SHE HAD TO BE TAUGHT HOW TO POACH AN EGG) or Nicole, who can’t count her protein?

Obviously, Sai. She bids everyone good luck in her native tongue and insists that if we had seen her in Asia, she would have excelled, except, whatever, we don’t care about all the foodgasms your dishes would have given us if you can’t master basic techniques, some of which, YES, are French, and, SORRY, are important to international cuisine.

Next stop: Barcelona. Detour to Mugaritz anyone?