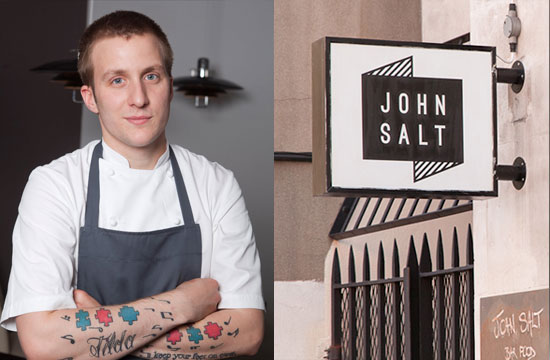 British wunderkind chef Ben Spalding, who offered an exorbitant Christmas dinner for four worth $200,000 earlier this year, announced that he would split with the pub the John Salt after a disagreement over the menu.

Now, this is a fairly standard acrimonious split between a restaurant owner and a chef, except for three key facts: Spalding is 25, he’s only been at the John Salt for a month, and he left because he wasn’t allowed to cook the food he wanted to make. Such food, according to the Independent, included fancy items like a “12-course tasting menu [which] featured dishes including a brick coated in caramel glaze with chicken liver parfait and a 45-component salad.” Spalding, who’s had stints at high-end restaurants such as Per Se and The Fat Duck, chafed when asked to make homey pub food like “burgers and chips.”

Normally such a move would smack of pretension, especially from a chef his age, save for the fact that Spalding is quickly becoming one of England’s hottest young chefs. In an early review of the John Salt, The Independent “praised Mr Spalding’s ‘extraordinary’ cooking and described his heel of beef as ‘like a roast on ecstasy; every taste is heightened’.” (No one knows, however, if that ridiculously expensive dinner was ever purchased.)

And over Twitter, Spalding’s motivations for leaving became clearer: “I am afraid I was put in a position where i was unable to do my job,” he told a disappointed fan who looked forward to his cooking. (He offered refunds to his guests, as well as offered makeup dinners for booked guests at a different venue.)

[The Independent via Eater]