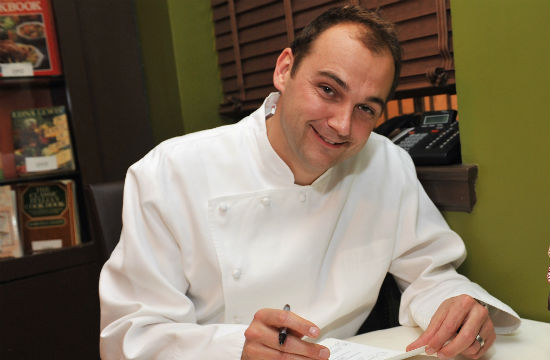 “I’ve been reading and studying a lot about Miles Davis and I think Miles Davis has influenced this restaurant so much,” he dished, citing Davis’ improvised, “collaborative” style, his definitive “cool” factor, and how he was “constantly reinventing himself” as qualities infused into the restaurant’s menu.

Daniel also finds himself attracted to the controlled chaos of The Stones. “The Rolling Stones seemed very loose and wild, but when you read about them, you realize that everything they did is very deliberate,” he explained. “Even if they’re doing something crazy on stage -— destroying a guitar or something —- it was planned…That also is inspiring.”

If Eleven Madison Park is on the road to conquer World’s Best Restaurant (and owner Danny Meyer says it is), then Apple gets a nod in the acknowledgments as well. “How visual they are and how simple they make everything seem” encourage Daniel’s plating and execution of his 16-ingredient menu grid.

Listen to the rest of the interview here for more on Daniel’s grocery shopping on a budget tips (more vegetables), his guilty pleasure snack (sour gummies), and the first time he tasted fast food (at age 19!).