For Funky, Microbial Flavors, David Chang Turns To An Academic 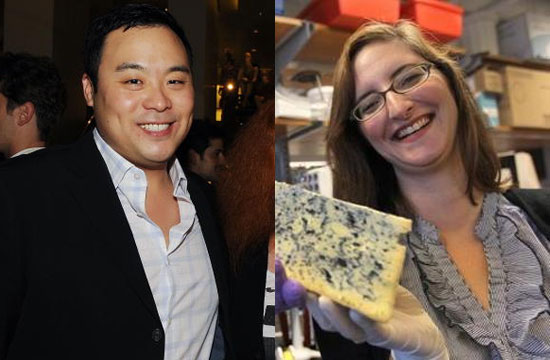 It looks like the writers at the New York Times’s Dining Section are on some sort of microbial kick, given that they ran two pieces today about the tiny bacteria and fungi that impart funky flavors to our favorite, umami-bearing foods — specifically the ones at Momofuku. While the first piece, about fermentation evangelist Sandor Ellix Katz, brought him to the back rooms of Momofuku (where he tried, of all things, pine nut miso), the second showed us that occasionally, David Chang turns to an academic for assistance.

Meet Rachel Dutton, a Harvard microbiologist whose research into how microbes communicate and build organisms led her to the world of cheesemakers, picklemakers, and kimchi-lovers — people who tweak the fermentation process to produce unique textures and flavors. Currently, she’s attempting to map and sequence the DNA from 160 different types of cheeses from around the world, but her discovery that microbes –and thus fermented flavors — are different from region to region got Chang wondering whether a “microbial terroir” exists — a terroir as specific as the East Village.

“How can we make New York taste New York?” he asked the Times. “What makes terroir is the microbes. It’s literally what’s in the air.”

Dutton assists other chefs, too, particularly the ones who send her interesting cultures to study: Jim Lahey of the Sullivan Street Bakery (and the infamous no-knead bread) asked her once to compare his sourdough starter with one that he made in Tuscany (and found, to her surprise, that they were 90% identical). And occasionally (okay, more than occasionally), she does unscientific taste tests of her samples, like Momofuku’s miso:

“I had no idea how delicious the fresh koji was, when you ferment the rice with Aspergillus,” she said. “It goes from tasting like plain rice to tasting like this incredibly sweet, almost dessertlike food. There’s nowhere you can taste that, unless you make it yourself.”