Food Network Star Recap, or, The Rejected Around NYC In 80 Plates Pilot 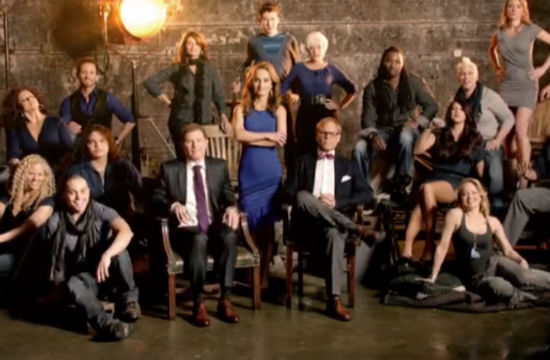 This week’s installment of Food Network Star managed to stuff itself into a 90-minute time slot, down from last week’s two hours. Will we ever get down to an easy 42-minutes plus commercials? Probably only if Giada De Laurentiis cuts down on her Italian pronunciations. (It takes her at least 10 seconds to get out the word “mozzarella” with all the added trills.)

This week’s challenge: Take on a food-famous neighborhood of Manhattan, soak up all you can about its culture and cuisine, cook a dish inspired by that neighborhood, and oh yeah, to prove your people skills, go ahead and take a tour group on a bus tour of your assigned ‘hood. Sound an awful lot like a food competition show on another network right now? Yeah, we thought so, too.

Team Giada is going to Arthur Avenue, “the original Little Italy”, while Team Bobby is headed to Harlem. Team Alton treks to the Lower East Side to dig into the iconic Jewish Kosher food scene.

Judson seems bummed about getting stuck with The Pickle Guys for his dish assignment, but he’s clearly never had a horseradish pickle there, otherwise he’d be stoked. Justin grabs Kossar’s Bialy, primarily because he’s the only one who knows what a bialy is. Marty takes on Katz’s Deli, and Emily agrees to take Steit’s Matzoh Market. After a quick lesson, Team Alton rushes back to the kitchen to whip up some dishes for their bus tourists featuring notable ingredients from their assigned eateries. Did we mention the tour vehicle transporting them is the absurd, sideways-riding party bus better known as The Ride? Emily almost voms with the combined challenge of standing up inside it, talking, and thinking. Jusdon also flops by trying too hard with his pickles.

Over on Team Bobby, Michelle takes on the catfish and collard greens at Sylvia’s. Malcolm takes Casablanca Butcher Shop and dresses up some of its ribs. Eric focuses his hand-crafted style on Savoy Bakery and reinterprets their cheese danish into a lovely turnover. Nikki tackles the Texas-style Dinosaur BBQ, but fails to impress when all she does is throw some of their signature Wango Tango sauce on meat. Kara, who knows nothing about Harlem, soul food, black people, or waffle batter gets stuck with Melba’s, and, while she was busy tripping over whether to call Melba “black” or “African-American,” she forgets to tell the origin story of chicken and waffles. Facepalm.

Giada takes a different approach with her team and seems to have restaurant assignments in mind, as opposed to letting them choose their own like Alton and Bobby. Yvan gets Mike’s Deli, but doesn’t really cook and instead just cranks out a bunch of little caprese salad bites using the deli’s famous fresh-pulled mozz. Ippy is assigned Arthur Avenue Trattoria, since he’s apparently some sort of eggplant parm visionary, and she almost cries upon tasting his eggplant parmesan-inspired soup. Josh gets the sausages at Peter’s Meat Market and calling his a “presentational crash and burn” is the severest of understatements. South African Linkie gets Palombo’s Pastry Shop to give cannollis a cheesecake makeover, while Martita makes ceviche inspired by Cosenza’s Fish Market.

Teams get debriefed by their mentors after everyone has presented, and Team Giada winds up winning the challenge. Kara is up for elimination from Team Bobby for her unmemorable dish and equally bland cheerleader persona. Judson’s faked enthusiasm leaves him in last place on Team Alton. The two must battle it out in the producer’s challenge: make a potato the star of a dish and present it to The Network. Making a potato memorable? No, seriously, this episode must have been conceptualized after Bob Tushman got an Around the World in 80 Plates screener of the London pilot.

Kara makes a bacon and chive twice-baked potato, but fails to make the dish memorable. Susan Fogelson and Bob also hate her cheeriness and note that they’re looking for a “grounded expert.” Judson makes a much more sophisticated dish, wrapping goat-cheese-and-mascarpone-stuffed salmon with fried potato slices. Judges contest that he failed to make potato the star of the dish. They also criticize his corporate-y showmanship and he cries, but Alton promises he can strip away the spokesman veneer from his contender and draw out a more sincere presentational style.

Ultimately, Kara goes home. So, Team Bobby and Team Alton are both down by one while Giada’s team remains whole. Stay tuned next week (for another 90 minutes… we guess Giada has a lot of Italian ingredients to work with again) when contestants take on their very own Chopped challenges.