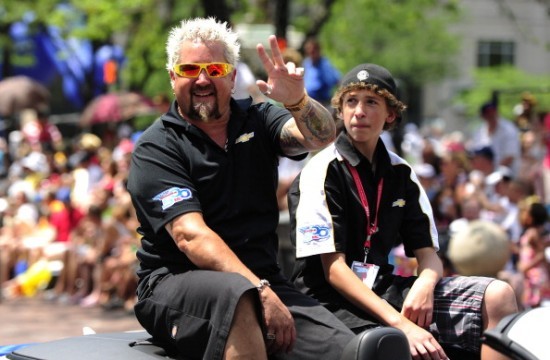 With Guy Fieri’s first New York City restaurant opening up next week in Times Square, it’s inevitable that the unradical elite diners of the restaurant world are going to actively begin Hating On Guy and his establishment, and his stupid hair, and his stupid face, and oh my god HE’S SO STUPID.

If Guy Fieri were a normal person and not a walking ad for NASCAR, David Chang’s mockery of “those dumb f – – king sunglasses and that stupid f – – king armband” would likely leave him in tears. But surprisingly — or unsurprisingly, we could go either way on this — Fieri is incredibly zen about the derision piled on him from the New York restaurant scene, as he told the New York Post. “People are always putting you in check, and that’s what makes us play harder.”

He also showcases a surprising self-awareness when he points out that he’s not trying to compete with the giants of New York, though he clearly admires them. “Look, I’m not Mario Batali, I’m not Bobby Flay — there’s only one of those cats,” he admits. “I’m not trying to be something that I’m not.”

Yeah, you sort of limited yourself to never playing in their league when you opened up your 500-seat “bling and bluster” restaurant in Times Square. Though it’s nice to hear that you’ve been paying attention to Tyrion Lannister:

Never forget what you are. The rest of the world will not. Wear it like armor. Then it can never be used to hurt you.

(Okay, Tyrion was using that to refer to a Game of Thrones character’s background…but it sort of applies here.)