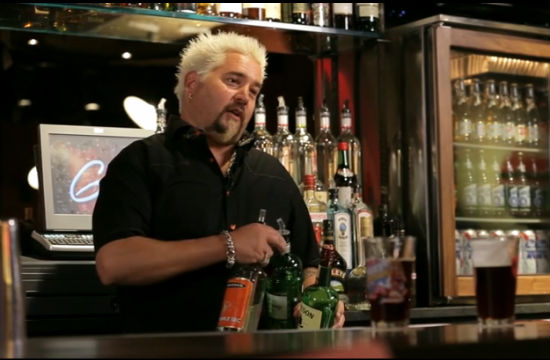 Here’s the thing: one would think that when you ask Guy Fieri to pour you a beer at Guy’s American Kitchen and Bar, you run the serious risk of being poured a tall, cold draft of Natty Light. Luckily, his beer of choice just so happens to be the house-brewed Red Amber Ale that’s named after his sister Morgan, who died of cancer and is memorialized not only in beer form, but also in tattoo form on Guy’s forearm. Beer AND a tat? What a great bro!

Like Bon Appetit’s Restaurant and Drinks Editor Andrew Knowlton, though, you may fear that it was just beginner’s luck when you received so decent a beer option. And Bon Appetit’s Shot & a Beer series involves hitting up a celebrity chef for both their favorite brew and a shot. Into what horrifying territory do we delve after such a pleasant Red Amber Ale?

Well, howzabout Guy’s favorite — a Jameson/gin/triple sec floater with a dollop of ice cream and an anchovy!

If Knowlton had any suspicions that Guy was just fucking with him, the look on his face didn’t betray them. He, in fact, made the same face we imagine Ruth Bourdain probably made that time she freebased Tangerine Peel out of Mario Batali’s croc. (Don’t ask.)

After a glorious moment of allowing Andrew Knowlton to rue the day he walked into Guy’s American, Fieri chuckles and admits he was just kidding. Come on, guys, he’s a Jameson man! #7 all the way.

Check out the vid below.