Our Interview With Jay Rayner: You Either Embrace New Media Or ‘You Go Psychotic’ 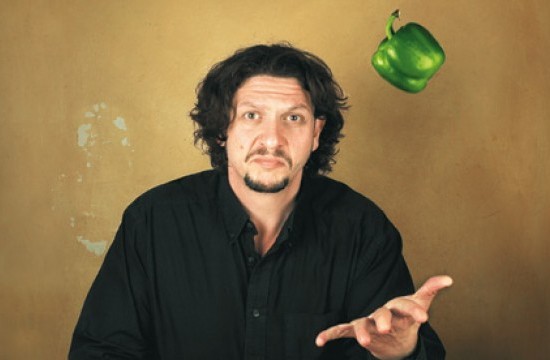 In the second half of our interview with Jay Rayner, we ended up jumping, ADD-like, from topic to topic: Williamsburg pop-ups, restaurants run by political organizations, the editing process behind Top Chef, and the people he loves to read (hint: not his fellow restaurant critics). You can read the first part here.

The Braiser: Since you spend a lot of time focusing on chefs and their existence in this new media space, who do you think deserves to have more recognition? Who could use it?

Jay Rayner: Media is a deeply unreliable beast. It is subject to the caprices of fashion, [and] it’s very hard to mediate that. My job is to find some cooks who are doing interesting things. My review last Sunday was of a restaurant outside London where the kitchen is held up by an 18-year-old guy called Luke Thomas. I’ve decided to give him some attention because he’s cooking amazingly for someone who is only 18 years old.

It’s also cyclical. You have the big-name chefs, and then everybody gets bored with them, and there’s a new set of big names. I’m not sure I’m really in a position where I should say what the next big thing should be, or who deserves attention. It’s kind of like, “If it quacks like a duck and walks like a duck, it’s a duck.” You know when it comes along.

Jumping off of that, there are a lot of people who are bringing all of this attention to food worldwide… Would you say that the attention has actually made food better?

It’s a double edged sword. Any big conversation about any subject has to be a good thing. When people are talking about something and showing an interest that has to be for good. But the downside is it makes everything very frothy.

…You know, restaurants are not vital. They’re not an integral part of society. But it makes us feel a lot better, like getting a new pair of shoes or going to the movies. So, I would caution people about getting too excited and too serious about what it all means. If you like the food, you want to know about the next good place to go. And if you want to know what’s good, you also want to know what isn’t so good. You want to be part of the debate, and that has to be a good thing.

Do you think that makes the older chefs who’ve been grandfathered into this new world strive harder?

I imagine in some ways, you could be referring to me. I’ve been doing this for 25 years. When I first started, on my student paper, it was all typewriters and then it went to computers and now I’m existing  in the online world. So if you’re a chef who is past the point where you do the occasional interview — now you’re in a fucking universe where your antics can turn up as the lead story on Eater or The Braiser and be faffed around Twitter for a 24-hour news cycle. It’s disconcerting. You either embrace that or you [go] psychotic. But, you know, the bottom line most of the time will be, “the food is good”. If you’re delivering something that is value for money, and seems to deliver on its premise, that’s still really what’s important. That’s what will keep you in business.

Has there ever been a case where a chef launched himself through the media, and then everyone started hating on his food?

Let’s be clear: cooking a restaurant is bloody hard work. Being a restaurant chef is really hard work. Very hard. And then the media comes along and says, “Would you like to do this TV presenting? Would you perhaps like to do some cooking demos? Would you perhaps like to endorse a few bits and pieces here? The money will be this and that…” That’s easier. I wouldn’t begrudge anybody that.

It drives me nuts when people talk about chefs “selling out”. You try working in a restaurant kitchen for 15 hours a day for six, seven, ten years and see how you like it. So I begrudge no chef whatsoever to make some extra money by pursuing those opportunities. The problem is, if they then lose sight of the thing which made them that, which is their cooking — that is risky. I can see exactly how it happens. It is risky.

Which critics do you find interesting to read?

I don’t read an enormous amount of most of them because I don’t want to rely on what they’ve written. I don’t read Giles [Coren] and I don’t read A.A. Gill because I think on any given weekend, they can out write me. And I think I could out write them as well on any given day as well. But I don’t want to have that experience of reading the review and wishing I’d written that. There are other critics I won’t name, but I still won’t read them because they’re never going to write anything that I’d wish I’d written.

What inspires you? What influences your writing most?

I think a clear voice, a discursive voice, authority, [and a] willingness to entertain [inspires me]. I think what doesn’t inspire me is a desire to be pretentious. Don’t try and sound clever, it’s not important. Please, go make me laugh. If you can make me laugh, I will love you forever. There’s enough to cry about in this world. Any writer who can make me laugh will be my friend for life.

…I’m a big fan of David Sedaris, who’s a humorist, but he’s almost too maudlin for that. The economy of his prose is  breathtaking. There’s a writer in the UK called Caitlin Moran, who’s a friend of mine, and she’s just published a book over here called How to Be a Woman which is a big seller in the UK — I urge you to get it — and she’s an incredibly funny writer. Very human, very true, in turns of phrase and everything else. She always makes me jealous, because she writes things I wish I’d said.

Have there ever been times where you’ve been filming a television show, and you’ve said something that you think just captured the moment really well, but it didn’t make the cut?

It’s all the time that you say something that doesn’t make it, because editing is everything in television. Nobody wants to watch a program that’s four and a half hours long. When I was on Top Chef Masters, the judges’ panel went on for three hours, and then it’s about six and a half minutes of the show. So, I must have said some absolutely brilliant things on camera which never made the cut.

These cooking shows are not about food. They’re about television, they’re about entertainment, and about creating the best viewing experience you could possibly have. They spend an enormous amount of money on shows like Top Chef and Top Chef Masters, and so they therefore expect to go into the editing with as much of everything as you can have. They will get you to ask questions time and time again so they can get it from another angle.

I loved your review of Elijah’s Garden [a restaurant owned by the Nation of Islam] in the book. How often does that happen, that there’s a political aspect to what you’re doing?

Not often, but then there aren’t many political groups I’ve [known] that own restaurants. I mean, if the Republican Party had a restaurant…